Leading Kenyan drug trafficker jailed 25 years in the US 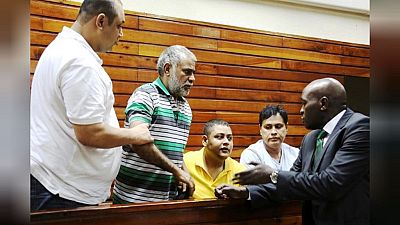 A U.S. judge sentenced a leading Kenyan drug trafficker, Baktash Akasha, to 25 years in prison on Friday after he pleaded guilty last year to conspiracy to import heroin and methamphetamine and other crimes.

U.S. District Judge Victor Marrero in Manhattan sentenced Akasha, 42. Prosecutors described Akasha as the leader of a crime family called the Akasha organization, a major smuggling operation connecting the poppy fields of Afghanistan to European and U.S. cities. In his guilty plea, Akasha also admitted to bribing officials in Kenya.

His brother, Ibrahim Akasha, has also pleaded guilty in the case and is scheduled to be sentenced by the same judge in November.

They want a life sentence without an American victim, without drugs in the United States.

Baktash Akasha took control of the organization after his father, Ibrahim Akasha, was killed in a shooting, according to authorities.

Prosecutors had sought a life sentence for Baktash Akasha.

His lawyer, George Goltzer, asked for a sentence close to the legal minimum of 10 years. Goltzer argued the lighter sentence was warranted because Akasha was caught in a sting operation and never actually brought any drugs into the United States.

“They want a life sentence without an American victim, without drugs in the United States,” he said during the hearing.

Just before he was sentenced, Akasha apologized to his friends and family as he asked the judge to show “mercy.”

Goltzer said after the sentence that the judge had been “very thoughtful,” but declined to comment further.

The case stemmed from a U.S. Drug Enforcement Administration probe into the Akasha organization, leading to the extradition of the brothers to the United States from Kenya in January 2017 along with Gulam Hussein, a Pakistani national charged with heading a drug transportation network, and Vijaygiri Goswami, an Indian businessman accused of managing the organization’s drug business.

The four defendants were arrested in Mombasa, Kenya, in November 2014 in a U.S.-led sting operation, in which authorities said the Akasha organization provided 99 kilograms (218 lb) of heroin and two kilograms of methamphetamine to DEA informants posing as drug traffickers.

A fifth defendant accused of working with the Akasha organization, Muhammad Asif Hafeez, was arrested in London in August 2017. The United States has requested his extradition.

The Akasha family has been involved in the drug trade for years, according to U.S. diplomatic cables published by WikiLeaks. The Satao Project, a private company focused on fighting poaching, has said the Akasha network was also linked to around 30 tons of ivory seizures.