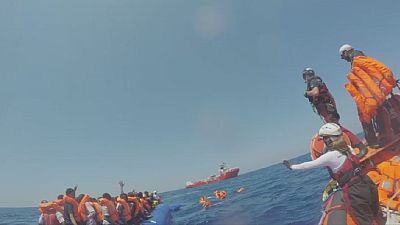 A Spanish ship carrying 160 migrants which has been stuck at sea for 13 days can now enter Italian waters.

The ruling by an Italian administrative court is in defiance of a ban by Interior Minister Matteo Salvini.

“We have overturned Salvini’s decree which banned us from entering Italian waters under the threat of confiscating our boat. We can (now) enter Italian waters without fear of being fined or having our boat confiscated. This is what I am saying and also the ruling says these people must be disembarked, but it does not say in which port, therefore, it’s the Italian government which must respond to its administration, its justice system. We shall see how it evolves over the next hours, we will see what happens. It’s important that this decree, which was boasted about so much as a great success, has turned to nothing”, said Founder and Director of Proactiva Open Arms, Oscar Camps.

We can (now) enter Italian waters without fear of being fined or having our boat confiscated.

But the Italian Interior Minister criticized the judge’s ruling.

“Just think about the kind of strange country we live in – an attorney (he means a judge) of an administrative court of the Lazio region wants to give the go-ahead to a foreign ship packed with migrants to disembark in Italy. In the next few hours, I will sign a warrant again with my ‘no’, because I don’t want to be the accomplice of human traffickers”, Matteo Salvini said.

The charity vessel Open Arms had appealed to the court to allow it to come to Italy. It said international maritime law meant it had the right to bring migrants to safety.

The charity said it is doing all it can to have migrants get badly needed treatment for ‘‘stress and quite serious issues’‘.