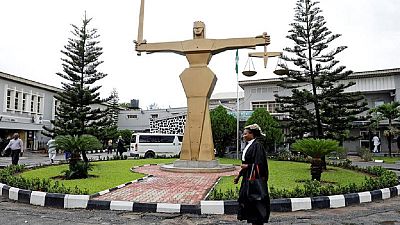 A court in Nigeria has granted the state spy agency a request to hold a publisher and politician detained last weekend over a banned protest known as “Revolution Now.”

Omoyele Sowore, who is publisher of the Sahara Reporters news portal, is to be held in detention by the Department of State Services, DSS; for a period of 45 days. DSS had asked the court for 90 day detention.

Reports indicate that he is set to be charged with terrorism, a charge that a leading legal expert in Nigeria, Femi Falana, has insisted will fall flat when trial opens.

Local media reported that his arrest was linked to plans to mobilise people in Lagos and other parts of the country for a revolution protest tagged ‘Days of Rage’ to demand a better Nigeria.

The arrest elicited a wide range of condemnation on social media with people accusing the government of seeking to stifle dissent and the right to peaceful protest.

Breaking: Court grants DSS permission to keep Omoyele Sowore in custody for 45 days with effect from today to conclude its investigate on him. The Secret Police had asked for 90days. pic.twitter.com/hI85EdZ8Pq

The State Security Service said the calls for revolution were unlawful. “He’s with us,” said a spokesman, confirming the arrest.

“He has crossed the line, he has threatened public safety… Nothing will happen, there won’t be any revolution. The government, which has been elected democratically, will be in place.”

A presidency spokesman last Sunday said there is “a difference between peaceful call to protest and incitement for a revolution.”

The statement did not refer to the arrest, but said “the ballot box is the only constitutional means of changing government and a president in Nigeria.”