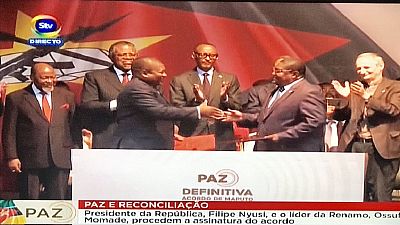 African leaders in the southern and east Africa region witnessed the signing of a final peace deal between the Mozambican government and the main rebel opposition.

South Africa’s Cyril Ramaphosa, Namibia’s Hage Geingob, Rwanda’s Paul Kagame and Edgar Lungu of Zambia were among the leaders in Maputo for the signing ceremony.

President Lungu is participating in his capacity as Chairperson of the regional bloc, SADC’s Organ on Politics, Defence and Security Operation.

The final pact was appended to by President Filipe Nyusi for ruling FRELIMO whiles leader of the opposition RENAMO, Ossufo Momade, signed the pact.

The deal is expected to bring durable peace to the southern African country that was wracked by a civil war years ago.

Signed, sealed… with the hope that delivery will be made soon. Millions are watching. Presidents, AU and EU leaders flew all the way from their countries to witness it. It is grand. If it fails, the embarrassment will be the same dimension. You cannot afford to disappoint again pic.twitter.com/DWkdWbUOaL