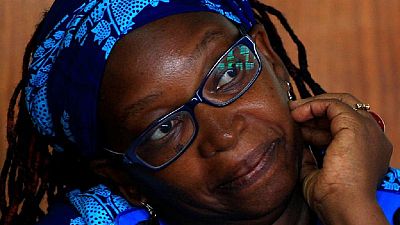 A Ugandan academic who once called the president “a pair of buttocks” has been sentenced to 18 months in prison after being found guilty of cyber harassment.

Stella Nyanzi on Friday flashed her bare breasts in protest while appearing in court via video link from prison. Amnesty International has called her conviction “outrageous.”

Nyanzi attracted the attention of authorities with bold, often profane descriptions of alleged shortcomings of the government of longtime President Yoweri Museveni.

Some of her Facebook posts criticized Museveni for not providing sanitary napkins for schoolgirls.

Nyanzi was found guilty on Thursday of cyber harassment but acquitted of offensive communication. She is expected to serve nine months in prison after already spending nine months behind bars.