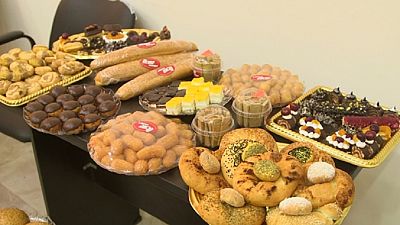 Egypt’s first commercial gluten-free bakery opened its doors in the in the neighbourhood of Zeitoun in the capital Cairo.

Specialist baker Hamdy Mohamed Hussein worked at his father’s bakery for over a decade before getting a job at Ain Shams University’s medical school. While baking for children with different nutritional disorders he was trained to bake bread for patients with allergies related to wheat.

“I did not choose to produce gluten-free baked goods. This was kind of imposed on me when I saw the suffering of mothers and children, their regular visits to hospitals and how difficult it was for them to find gluten-free products,” says Hamdy Mohamed Hussein.

I did not choose to produce gluten-free baked goods. This was kind of imposed on me.

According to Mostafa El-Hodhod, professor of paediatrics at Ain Shams University, coeliac disease is the most serious disorder associated with gluten consumption. Yet, it is not as widespread as wheat allergy, which is a reversible disorder.

The symptoms of wheat allergies include vomiting, diarrhoea, bloating and skin rashes.

But after a year of avoiding gluten, the symptoms fade. Coeliac disease, however, is incurable.

“The most dangerous thing about it is that it lasts for the patient’s entire life and if the latter does not strictly and meticulously avoid wheat, complications can lead to tumours in the digestive tract,” he says.

Neama Abdel Maqsoud is the grandmother of a four-year-old boy who has been recently diagnosed with intolerance to soy and gluten. She discovered Hussein’s bakery while searching the internet for affordable gluten-free products.

“I am planning to monitor his diet carefully to see if that will reflect on his body,” she says.

“He is not benefiting from any of the foods that trigger his allergies. On the contrary, that food gives him stomach cramps and makes him vomit. Of course, I want him to get better. So I have to follow the diet and have him avoid all prohibited foods.”

According to Hussein, gluten-free flour is a mixture of several alternatives to wheat including corn and potato starch as well as rice flour.

But gluten-free products are still scarce in Egypt, according to Mostafa El-Hodhod, professor of paediatrics at Ain Shams University.

“You can find (gluten-free) products at the clinical nutrition unit at Ain Shams University’s medical school and at the food laboratory of Cairo University’s agriculture school,” he says.

“As to what is available beyond these two, you can find imported baked goods, and there are also local products made by Egyptian bakers. However, I cannot say such products are 100 percent safe because they are not subject to any quality controls or inspections.”