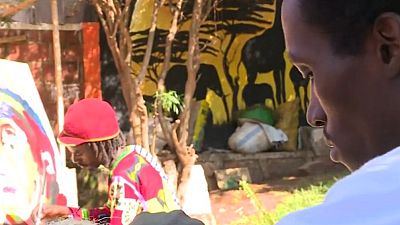 Mike Katihabuga and Djamal Ntagara are two visual artists who met in Rwanda in 2017. Katihabuga had escaped Burundi at the height of the conflict in 2015.

He found refuge in Rwanda and lived in a refugee camp before moving to the capital a year later, to pursue art.

The 25-year-old met Djamal, a painter based in Kigali and they bonded over their love of art and soon became friends.

He found refuge in Rwanda and lived in a refugee camp before moving to the capital a year later, to pursue art.

Djamal’s art centre, ‘Kanyaaburanga’, which means a little beautiful place, is where Katihabuga found a space and a home for his creativity after his friend invited him to work at the art studio.

“Helping people doesn’t mean you need (to have) something big, something very, very big so you can help people. A small thing you have got and a good heart you have got, they can be enough to help someone,” said Djamal.

The art centre is also open to other artists from Burundi, Rwanda and the Democratic Republic of the Congo, who work and display their art here.

The small and impoverished East African nation of Burundi has been unstable since 2015, when President Pierre Nkurunziza decided to seek a third term in office that his opponents said was unconstitutional.

Rwanda now hosts about 174,000 refugees, including 57,000 people from neighbouring Burundi who fled violence in 2015. Most of the refugees live at Mahama camp in Kirehe district.

About 13,000 live in cities where they are free to work and live independently like Katihabuga.

“In a refugee camp, people just keep to themselves but here in Kigali, you can move around, meet new people and you can challenge yourself to do new things,” said Katihabuga.

The friends exhibit their work side by side, and like to work on various subjects including portraits, landscapes, and wildlife among.

Sales from their art help them both support their families.

“When I had the opportunity to meet Djamal, we talked, and we had a lot in common. We are both young. He said to me — let us work together and we can do great things,” said Katihabuga.

“When you don’t have a space, a place where to feel you can express yourself, you know, you cannot make that art of yours to move up and your art when it is not moving, I am not sure if it can help you survive,” said Djamal.

Rwanda also hosts refugees who have fled the Democratic Republic of Congo during bouts of instability there over the past 20 years.