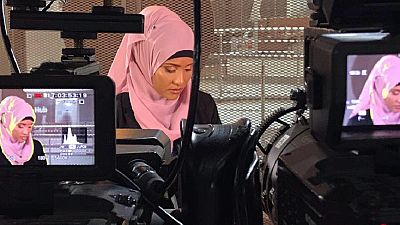 The Somali government will roll out an annual award scheme in honour of Hodan Nalaye, a Somali-Canadian TV host who was killed late last week in the city of Kismayo in an Al-Shabaab attack.

Minister of Foreign Affairs, Ahmed Awad, confirmed that his Ministry will have the Hodan Nalaye Award in honour of the deceased’s inspirational life.

“Every year we will recognise an outstanding individual who made a positive contribution from the Somali Diaspora,” the Minister said in a July 15 tweet promising to follow with “More information.”

In honour of hodantv's inspirational life MofaSomalia
will have (The #HodanNalaye Award) inshaAllah. Every year we will recognise an outstanding individual who made a positive contribution from the Somali Diaspora. More information to follow. pic.twitter.com/2QIytrKgyV

On Friday, the journalist dedicated to telling positive stories from a country suffering through decades of civil war, extremist attacks and famine was killed along with her husband, Farid Jama Suleiman, entrepreneur Mahad Nur and at least 23 others after a bomb exploded outside the Asasey Hotel in the Somali city of Kismayo and gunmen stormed inside. Fifty-six other people were wounded in the attack, according to the Jubbaland regional president.

On Saturday, friends and family reeled as they heard that Nalayeh, 43, a journalist and mother expecting her third child, was among the dead.

Maaz Khan, a 24-year-old filmmaker in Toronto, said Nalayeh had shared her hard-earned wisdom when he met her a few years ago.

“She was always very inspiring,” he told The Associated Press. “She would say, ‘It’s tough in the beginning, but always push through and don’t give up on your passion.’”

Ahmed Hussen, Canada’s Minister of Immigration, Refugees and Citizenship, mourned the journalist’s death, saying on Twitter that she “highlighted the community’s positive stories and contributions in Canada” through her work.

“We mourn her loss deeply, and all others killed in the #KismayoAttack,” he said.

Nalayeh was born in the northern Somali city of Las Anod but moved with her parents and 11 siblings to the Canadian province of Alberta in the winter of 1984, when temperatures dropped to -40 degrees Celsius. Her father, a former Somali diplomat, took a job as a parking attendant, she told Toronto.com in a 2014 interview.