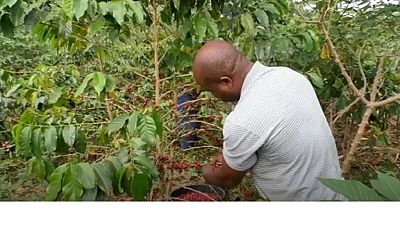 The Rwandan highlands with their acidic soils are perfect for growing coffee with a uniquely chocolatey taste – but many of the farmers only grow it for export.

A by-product of colonalisation by the German and Belgians who settled in the country in 1904, coffee does not have deep roots in the country’s indigenous culture, not least because of its prohibitively high cost.

While relatively affordable tea is being sold in local shops, coffee costs more than a worker might earn in a day.

As a result, most coffee farmers say that they rarely ever taste the coffee before exporting their harvest.

Vincent Habumugisha has a 15 years experience in coffee farming on 1.5 hectar of land located in Rwamagana district in Eastern province, where he harvests at least eight tons of coffee annually.

He employs twenty farm workers on a casual basis, but neither him nor his workers have ever consumed a cup of coffee in their lives.

“I farm the coffee for business, and the money I make I use it to make other projects,” says Habumugisha.

“The coffee consumption is not our interest or culture due to a cup being expensive where they brew it. The money is our target.”

“Having interest in drinking coffee is possible, but I have never tasted it even though I am a coffee farmer.

Also when you see how expensive it is, there is no need to think about it.”

Rwandan farmers are among the 63 percent of the 12 million population who still earn less than 1.25 US dollars a day.

A cup of Nescafe costs 20 cents, the same as a kilo of green coffee beans sells for, while prices for brewed coffee in urban coffee shops start around 1.70 US dollars and may be as high as 2.60 US dollars.

For the farmers, coffee means being able to put food on the table, pay school fees and invest in their children’s future.

But for some, things are slowly changing.

“I could not drink something I have never seen people drinking, but now I have tasted it and I appreciate it. It also gives me ideas about how to work in the coffee plantation to improve quality and quantity.”

In the cities, coffee is also seen as a luxury, but some take it in their stride.

Business meetings might be conducted over a brew of local coffee. And expats seek out an increasing number of coffee joints that also attract local residents.

The numbers of specialty coffee shops has grown from just one – Bourbon cafe – to about ten coffee shops in Kigali alone, with the latest being Question Coffee, or ‘Q-coffee’.

Question Coffee has some three coffee shops in Kigali and it can be found at many hotels.

Only three (3%) percent of the coffee grown is consumed locally according to the National Agricultural Export Development Board office.

As a consequence they launched the campaign to promote local coffee consumption.

Whether the cafe culture truly takes off has yet to be seen.