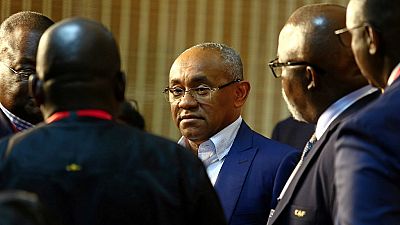 When Malagasy football association president Ahmad Ahmad took over the presidency of Africa’s governing body in March 2017, he pledged to develop the game of football on the continent and reform the scandal-tainted organisation.

Two years later, Ahmad has been compelled to hand over the mandate to manage football on the continent to FIFA Secretary General Fatma Samoura.

Ahmad who is being investigated over corruption and sexual misconduct allegations, will also have to work with FIFA to conduct a forensic audit of the Confederation of African Football (CAF).

In this article, we will highlight five key events that have shaped Ahmad’s time at the helm of African football;

Ahmad pulled off a major upset when he beat Cameroon’s Issa Hayatou to the presidency of CAF in Addis Ababa in 2017. Hayatou had been president of CAF for 29 years.

“When you try to do something, you mean that you can do it. If I can’t do it, I never stand,” Ahmad told journalists after garnering 34 votes against Hayatou’s 20.

The little-known official, whose Madagascar had never qualified for the Africa Cup of Nations at the time, pledged to make CAF more transparent.

The 59-year-old former football player and coach had also pledged to introduce a new code of ethics and extend ethics checks on African football officials.

Ahmad’s vision was seen to be consistent and attractive to that of newly elected FIFA president, Gianni Infantino, who was on a mission to salvage the reputation of the football governing body.

In July 2017, CAF delegates approved changes to the management of football competitions including the expansion of the Africa Cup of Nations (AFCON) from 16 to 24 teams.

Other key changes that were agreed at the two-day symposium held in Morocco included;

The switch from the January to the June window, was widely welcomed especially by European clubs that had long complained about the loss of African players during AFCON.

There were however some concerns over whether African nations that had struggled to host the 16-team tournament, would have the infrastructure to cope with a 24-team format.

Indeed hardly one year later, CAF triggered an AFCON organisational crisis, when it withdrew hosting rights from Cameroon, with a little over six months to the tournament (AFCON 2019).

In 2014, Cameroon, along with Ivory Coast and Guinea had been awarded hosting rights for the 2019,2021 and 2013 tournaments respectively.

CAF then sought to appease Cameroon by offering the continental football giant the AFCON 2021 hosting rights, a decision that was protested by Ivory Coast.

When the dust had settled, Egypt was selected to host AFCON 2019, while Cameroon, Ivory Coast and Guinea would host the 2021, 2023 and 2015 editions respectively.

READ MORE: Is it time for CAF to revise process of awarding AFCON hosting rights?

Ahmad was again in the spotlight this month when CAF revoked the African Champions League win by Esperance Tunis, that had been awarded amidst controversy over the Video Assistant Referee (VAR).

Esperance, which was ordered to return the trophy, medals and prepare for a replay of the second leg against Morocco’s Wydad Casablanca, appealed the CAF decision.

Esperance officials described Ahmad as incompetent and corrupt. The replay of the match set to be hosted in neutral territory will be held after the Nations Cup.

Hardly a day after CAF’s controversial decision on the African Champions League final, Ahmad was detained by authorities in France over corruption allegations.

FIFA, which confirmed the arrest of CAF’s president, said it had asked French authorities to share information that might be relevant to its own investigation taking place within its Ethics Committee.

Ahmad was eventually released by the French anti-corruption officials, without charges, but the scandal over a CAF decision to buy sportswear at inflated prices from a French company rather than directly from manufacturers, had rocked the football community in Africa.

FIFA and CAF jointly announced on Thursday that the global body would take over the management of football on the continent.

FIFA general secretary Fatma Samoura who is set to take over as “FIFA General Delegate for Africa”, from August this year, is tasked with improving the professionalism of the organisation and support growth and development in all African countries.

The statement added that FIFA are to also undertake a forensic audit of CAF.

Who is Ahmad Ahmad?