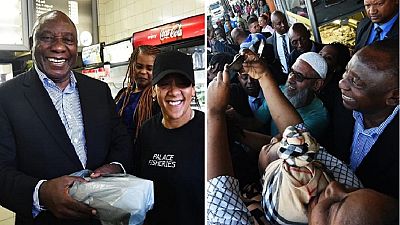 Cyril Ramaphosa, president of South Africa, on Tuesday walked into a restaurant in the city of Cape Town to buy lunch for himself.

With his usual smile, Ramaphosa is seen interacting with employees at the Palace Fisheries in Saltriver, Cape Town. He eventually walked away with fish and chips, the presidency said in a social media post.

“I’m told you are the best fish and chips shop in town,” he is heard saying in an exchange with an employee.

Outside the premises, a number of workers and citizens “ambushed” the president for selfie opportunities whiles others just cheered on at the sight of the first gentleman of the land.

President CyrilRamaphosa makes a quick lunch takeaway stop at the Palace Fisheries in Saltriver, Cape Town in between his meetings and preparations ahead of the State of the Nation Address scheduled to take place this Thursday, 20th June 2019. #SONA2019 pic.twitter.com/vOb2xQVUHC

Ramaphosa, who became president in February 2018, is set to deliver his first State of the Nation Address, SONA, since winning his first substantive term as president in May 2018. The address is scheduled to take place this Thursday, 20th June 2019.

He actually took time off his meetings and preparations ahead of the SONA to go get his own lunch, something that African leaders rarely do or even if they do, perhaps it is rarely reported.

Earlier this year, Ramaphosa boarded a train at the height of electioneering campaign in the country. The ruling African National Congress, ANC, said it was to afford him the opportunity to engage with everyday South Africans. He was stranded that day after a glitch caused the train to delay.

Fish and chips with the President pic.twitter.com/jbXsuwbIUv

The most recent instance of a president going into town was in Tanzania where president John Pombe Magufuli went fish shopping earlier this month. He was pictured at a busy market in the commercial capital, Dar es Salaam.