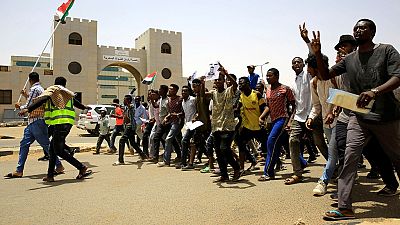 Diplomats from the United States and the African Union have intensified pressure on Sudan’s transitional military council that is currently working to resolve a standoff with protesters.

The diplomatic push comes after protesters demanding civilian rule called off a nationwide civil disobedience campaign and agreed to resume talks with the generals who ousted veteran leader Omar al-Bashir in April.

A semblance of normalcy

Traffic jams returned to downtown Khartoum and some shops in the capital’s famous gold market began to reopen Thursday as more residents and office employees ventured out.

An international team of diplomats is working to resolve the crisis.

Fewer troops and members of the feared paramilitary Rapid Support Forces, who protesters and rights groups accuse of leading the June 3 crackdown on protesters, were on the streets in downtown Khartoum, according to an AFP correspondent who toured parts of the capital.

But they were deployed in force in the northern district of Bahari, a bastion of protests against the ruling military council.

“Today is my first day to work after the campaign ended but I’m not in the mood to work,” said Suheir Hassan, an employee at a government office.

“Because, on my way I passed by the sit-in area and remembered that all those voices who used to chant revolutionary slogans have now disappeared.”

Demonstrators launched the strike after men in military fatigues carried out a brutal assault on a sit-in of thousands of people outside the army headquarters last week, killing dozens.

The protesters insist that they will only hold talks with the military, in the presence of a third party.

Washington and the AU, who have consistently pushed for civilian-led rule following Bashir’s ouster, stepped up efforts to find a solution Thursday.

Following the meeting, Nagy said the US had asked the TMC to stop attacks on civilians, withdraw soldiers from the capital Khartoum and stop repression of freedom of speech and the internet.

The same list of demands had been presented by the Alliance for Freedom and Change umbrella protest movement when it briefed the two US officials on Wednesday.

‘‘Amb Booth and I are now on our way to Addis Ababa to express support for the AU’s suspension of Sudan’s membership and its strong message on the need for a civilian-led government,’‘ Nagy tweeted.

Washington said Booth had been named to help craft a “peaceful solution” to the crisis that has rocked the northeast African country.

The AU, which suspended Sudan following the crackdown, said global efforts were on to resolve the crisis.

“I can say without excess optimism that the discussions that we are holding with each side separately are moving forward to a great extent,” AU Special Envoy to Sudan Mohamed El Hacen Lebatt told reporters Thursday.

An international team of diplomats was working to resolve the crisis, he added.

The US diplomats were also expected to meet Thursday with top envoys of Saudi Arabia, the United Arab Emirates and Egypt in Khartoum.

Experts say the three regional Arab nations appear to back the generals.

Days after Bashir’s overthrow, Saudi Arabia and the UAE offered a three-billion-dollar aid package to Khartoum, including a $500 million cash injection into the central bank to help support the Sudanese pound which has plunged since last year against the dollar.

It was the country’s worsening economic crisis that first triggered the protests against Bashir’s iron-fisted rule.

Talks between the protest leaders and generals broke down in mid-May over disagreements on who should lead a new governing body — a civilian or a soldier.

Relations worsened following the crackdown, with protest leaders now insisting any agreement reached with the generals have “regional and international” guarantees for it to be implemented.

Sudan has been led by a military council since the generals ousted Bashir on April 11 after months of nationwide protests against his three-decade rule.

Protesters remained encamped outside the military headquarters in Khartoum for weeks afterwards demanding civilian rule, until the June 3 crackdown.

Around 120 people have been killed since then, according to doctors close to the protesters. The health ministry has acknowledged 61 people died nationwide.