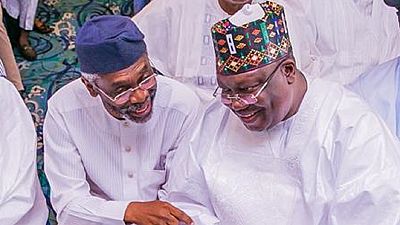 Nigeria’s second arm of government, the legislature, on Tuesday elected a new set of leaders to lead the ninth Nationals Assembly.

The country has two separate parliamentary chambers. The Upper Chamber (the Senate) and the Lower Chamber (House of People’s Representatives).

The Senate is led by a Senate President, whiles the House of Reps is led by a Speaker. Leaders of the 8th respective chambers were ineligible to contest with the past Senate president and House of reps speaker having defected from the ruling All Progressives Congress, APC.

The deputy president made news headlines last year after reports emerged that he had led thugs to steal the mace, the Senate’s symbol of authority, in protest to a suspension handed him. It was later recovered and Omo-Agege arrested and charged.

The current situation shows that the ruling APC is uncharacteristically holding all the top leadership of the legislature. Experts are projecting that it should ease the working relationship between the National Assembly and the executive.

The Senate under Bukola Saraki had routinely clashed with the executive leading to the mass defection of Senators to the main opposition Peoples Democratic Party, PDP, months to polls that were held earlier this year.

Clean sweep! Congratulations to all our elected presiding officers. May your tenure help deepen our democracy by improving the Executive-Legislative partnership in the overall interest of our citizens.

Lawmakers in Nigeria’s National Assembly – Senate and House of Representatives – are set to pick their respective leadership today at their first meeting since polls in March.

Local media outlets report that security is high at the complex in Abuja with state security officers having barricaded a number of entry points.

The Senators and Reps (as members of the lower house are referred to) were also transported from their hotel to the NASS premises in coaster buses because vehicles had been barred from entry.

It is clear that the two chambers will be welcoming new leadership after the Senate president in the 8th session, Bukola Saraki, lost his bid to return to the red chamber.

His position, Senate President, is being contested by two aspirants of northern extraction – Ahmad Lawan (Yobe) and Ali Ndume (Borno). Projections, however, show that Lawan is likely to be elected the next Senate President.

In the case of the House of Representatives, its erstwhile leader, Yakubu Dogara, got reelected but on the ticket of the main opposition Peoples Democratic Party, PDP. He defected along with Saraki from the ruling All Progressives Congress, APC, in the lead up to the elections.

The race for his seat is between Rep Femi Gbajabiamila (Lagos) and Mohammed Umaru Bago (Niger). Femi had served as House Leader in the 8th House of Representatives.

The man of the moment, Senator AHMAD LAWAN on his way to the National Assembly pic.twitter.com/q9AG1SA5L1 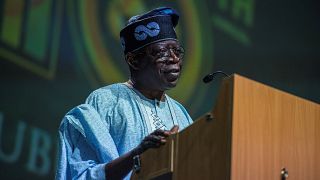