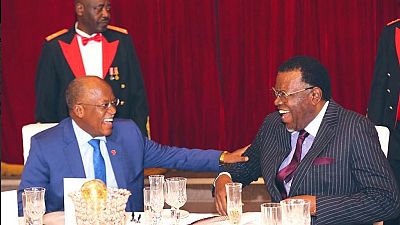 Tanzania’s president John Pombe Magufuli has pledged to offers Kiswahili books and teachers to Namibia, as part of efforts to reignite cooperation between the two nations.

Magufuli, who is on a rare trip outside the Eastern African region, also commissioned a street in the Namibian capital of Windhoek, named after Tanzania’s founding president, Mwalimu Julius Nyerere.

A statement from Tanzania’s Directorate of Presidential Communications said the resources would facilitate teaching of Kiswahili in Namibia.

Kiswahili, a Bantu language with lexical and linguistic similarities with many African languages, is widely spoken across the Eastern and Southern Africa regions.

Magufuli also reportedly ordered for the immediate revival of a Joint Permanent Commission (JPC), which previously brought together ministers of the two countries, to discuss areas of cooperation.

Tanzania’s privately-owned newspaper, The Citizen reported that the JPC hasn’t been held since 1999, leading to a decline in business cooperation.

It also reported that in the last one year, ‘ trade volumes between Tanzania and Namibia amounted to TZ Shs 59 billion ($25.7m), adding that there are only two Namibian companies operating in Tanzania.

Tanzania is in the final stages of opening an embassy in Windhoek, according to Magufuli.

Magufuli, who attended Cyril Ramaphosa’s inauguration in South Africa over the weekend, will also visit Zimbabwe and hold talks with president Emmerson Mnangagwa.