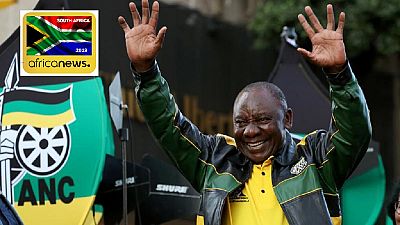 Former trade unionist and business mogul Cyril Ramaphosa was ANC leader going into the polls having taken over from scandal-tainted Jacob Zuma in early 2018. The Zuma era left ANC with a series of corruption scandals that still linger on.

Ramaphosa announced on February 7 during his State of the Nation address that the elections were due to be held on May 8. The notice set off a campaign season that saw parties crisscross the country canvassing for votes.

The major parties and leading personalities

ANC received some new lease of life under Ramaphosa, the former deputy president who is credited with steadying the party after the Zuma-era. His delicate balancing act was seen as the main trump card.

The main opposition Democratic Alliance led by Mmusi Maimane were looking to boost their standing in the parliament. Maimane, the DA’s first black leader had led the party to a good outing in the last local polls and May 8 was seen as a big test.

In the case of the EFF, its leader Julius Malema was leading a party that continued to grow its political fortunes since winning seats in the parliament just five years prior. He formed the EFF after being kicked out of the ANC.

Issues at the heart of the campaigns

The Zuma years left South Africa scandal ridden at the executive level. Ramaphosa’s leadership steadily moved to assure the populace and investors that measures were underway to fix the many anomalies.

Corruption was a big topic with hearings at a presidential commission sitting and exposing more rot in the months leading to the polls.

The question of land expropriation was big on the campaign. Whiles the ANC and DA were united on the point of expropriation without compensation, the DA advanced what it said was a less disruptive way of handling the issue.

The general conditions of living from health, public services, education, employment and housing were top of the agenda with parties making promises on how they would go about solving one or the other electoral concern.

South Africa is one of those African countries that allows its nationals abroad to actively participate in national polls. South Africans registered to vote abroad started the voting process across the world.

Then with days to the start of polls, special voting booths were opened to allow people who were for good reason going to be busy on voting day to exercise their franchise.

Among others: party heads, people in the essential services sector, persons who were on admission in hospitals etc.

Voting opened across the nation on May 8 with the process going largely smoothly. Very isolated incidents were reported but the process received high praise by the elections body, internal and external observers.

The Elections Body, IEC, had to in the process deal with reports that its indelible ink was of low quality and allowed people to engage in multiple voting without detection.

The IEC promised to launch a probe into the claim before addressing the issue of cases of multiple voting. Whiles at it, its progressive results release process was live on its website.

As projected, a clear trend emerged after 48-hours of an impending ANC victory but with a much lower percentage. The DA looked to have stagnated, if you want maintained their standing. The biggest winners being the EFF.

By May 11, the final largely uncontested results had been released with the following breakdown:

Swearing in of parliament, appointment of president

Under South African laws, the president must first and foremost be a Member of Parliament because it is the party with the majority that deploys one of its own to become president.

Ramaphosa and all other nominees spanning a record fourteen parties were subsequently sworn into office as lawmakers following which he was appointed as president.

The National Council of Provinces, NCOP, was also sworn into office the next day. The two incidents paved the way for the presidential swearing in ceremony in Tshwane, Pretoria on May 25.

The swearing in of president Ramaphosa

Over a dozen African presidents and government representatives were in South Africa for the swearing in ceremony of Cyril Matamela Ramaphosa as the fourth president of South Africa.

The event took place at a stadium in Pretoria. Government reported that the ceremony had been watered down as part of plans to minimise the cost that went into it.

The Chief Justice was again on hand to administer the oath of office in what the government tagged “The People’s Inauguration.” Ramaphosa is tasked with leading government business for the next five years.

Till then, the process in the southern most country on the continent has proven a true celebration of electoral democracy.

From the blast of the whistle to the end, the people of South Africa and Africans in general have cause to celebrate a process by all standards above board.