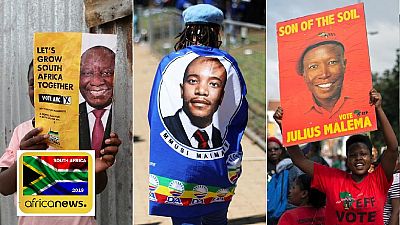 South Africans voting for a new national parliament on May 8 will have 48 parties to choose from — more than at any election since the end of white minority rule in 1994.

Many more political parties are contesting elections for nine provincial legislatures to be held on the same day.

The African National Congress (ANC) has won every parliamentary election since 1994, and opinion polls predict it will again win a majority of the 400 seats in the National Assembly, the lower house of parliament.

But President Cyril Ramaphosa is under pressure to reverse a slide in support for the ANC, which has seen its share of the parliamentary vote drop from a high of more than 69 percent in 2004 to 62 percent in 2014.

Parliamentary and provincial elections happen every five years, with seats allocated according to a proportional representation system.

Some polls suggest there could be coalition governments in provinces such as Gauteng, an economic hub where support for the ANC is expected to fall, or the Western Cape, which is controlled by the DA but where the party is seen losing ground.

Below are more details on the three main parties:

The ANC swept to power in 1994 under liberation hero Nelson Mandela, who became South Africa’s first black president after leading the fight against the brutal apartheid regime.

It has been the majority party in the National Assembly for the past 25 years and currently governs every province apart from the Western Cape.

Many black South Africans grew up associating the ANC with their dream of a country free from racial segregation and with equal access to jobs and education.

Although the ANC has achieved important successes by providing formal housing and basic services like electricity to many black families for the first time, the scale of the problems it inherited means change has been slow and many people today are impatient for more.

His successor, former trade union leader turned businessman Ramaphosa, is trying to make amends by cracking down on corruption and revitalising the stagnant economy. But he faces a struggle convincing some members of his party to back his reformist agenda.

The DA won 22 percent of the parliamentary vote in 2014, giving it the second biggest number of seats in the National Assembly.

It traces its roots back to the Progressive Party, a group formed by white liberals who opposed apartheid, and has grown partly by merging with other parties.

In 2015 the DA appointed its first black leader, Mmusi Maimane, to broaden its appeal and improved its national standing by leading coalition victories in local government elections in metropolitan areas like Johannesburg a year later.

But some analysts say it has lost its way since reaching what is considered its highest political milestone, and some polls show that its support could wane.

Last year the DA became embroiled in a bitter dispute with one of its most prominent politicians, former Cape Town mayor Patricia de Lille. De Lille has a strong following in the Western Cape and left the DA to form her own party, which could dent the DA’s support.

Some political commentators say Ramaphosa appeals to part of the DA’s support base, the middle class and business owners who favour market-friendly policies.

The EFF won 6 percent of the vote in 2014, making it the third-largest party in parliament. Some polls show the party almost doubling its vote share this time around.

Known for its far-left policies including plans to nationalise mines, the party punches above its weight on the political scene.

It played a key role in holding Zuma to account for spending state money on non-security upgrades to his private residence and has shaped the debate on land expropriation without compensation, a policy the ANC has said it intends to carry out in due course.

The EFF is led by Julius Malema, a fiery orator who formed the party in 2013 after he was expelled from the ANC, where he headed the party’s youth wing. His political rhetoric appeals to mainly younger black voters who are disillusioned with 25 years of ANC rule.

The EFF, whose lawmakers often dress in red overalls and plastic hard hats to show their allegiance to the working class, emerged as a kingmaker in 2016 elections in metropolitan areas like the administrative capital Pretoria and commercial capital Johannesburg, where it backed DA candidates.