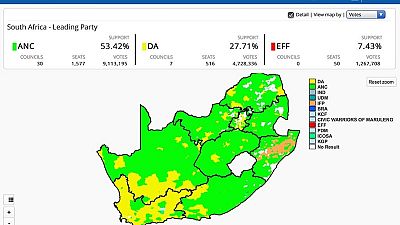 South Africa’s August 3 local elections was seen as one of the most keenly contested polls in recent years.

Results from the Independent Electoral Commission have been trickling in from different parts of the country even as vote counting continues in other places. The polls are seen as a barometer of the ANC’s wider popularity two decades after the end of apartheid.

With 80% of results transmitted, the breakdown looks as follows:

[Photo] On the lighter side, if parties were mobile phones 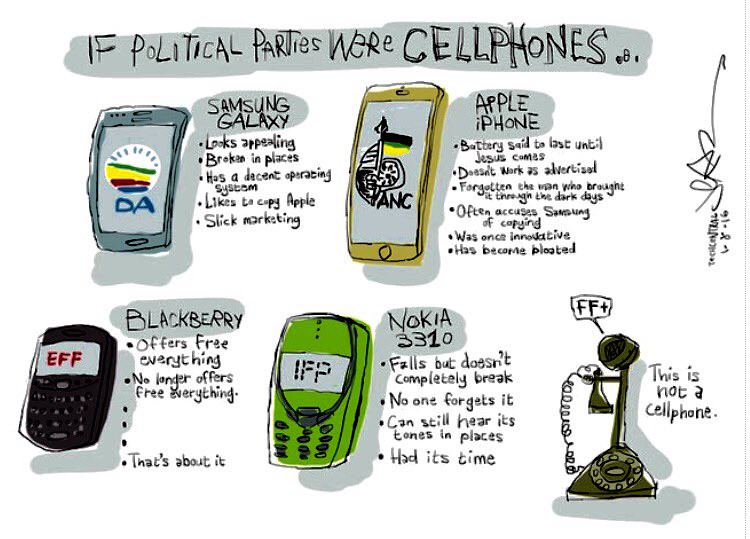 The IEC is projecting that 90% of the results should be completed by close of day today, whiles the remaining 10% should come in by Friday morning. Local media portal eNCA reports that the IEC cited glitches with scanning equipment in eThekwini.

The DA is hanging onto its lead in Nelson Mandela Bay with 83% of the result counted and vetted by the IEC.

These are three areas that are held by the ANC. The DA and and EFF are looking to eat into the ANC’s numbers.

ANC fails to win in Zuma’s home town of Nkandla

Contrary to earlier reports that the ANC had won in Nkandla, President Zuma’s home district, after collation of final results; the Inkatha Freedom Party (IFP) have retained the area.

The IFP is the fourth political force behind the ANC, DA and EFF, with 75% of results collated, they have won 5 councils with 222 seats but with 4.3% of support.

The ANC meanwhile have taken to twitter to celebrate its gains in the polls.

This is the first municipal election the EFF is participating in. The party was founded in 2013, two years after the last election in 2011.

Even though they have yet to win a council, the EFF has managed some 7.55% of support which translates to over 1.3 million votes.

The main opposition DA has celebrated re-election to run Cape Town, labeling it as an endorsement of its good governance record. In a statement on its website, the party said early results from the IEC, ‘‘bodes well for the DA’s electoral outcomes.’‘

Leader of the pary, Mmusi Maimane, speaking to journalists at the IEC’s results collation center said people had voted for change.

The party also celebrated the improved majority votes in retention of Midvaal, located in the Gauteng municipality.

In the Western Cape, the party announced re-election with outright majorities in Bergrivier, Langeberg, and Overstrand.

Poorer townships could swing results of polls, EFF could be kingmakers

Votes expected from the poorer black townships could significantly change the current picture.

Failure of the DA or the ANC to secure an overall lead, would mean that the Economic Freedom Fighters – led by firebrand politician Julius Malema (ex ANC youth leader) could find itself in the position of kingmaker.

With about 64% of ballots counted in the key South African municipality of Nelson Mandela Bay, the main opposition DA has a significant lead at 54% with the ruling ANC trailing with 36%.

The close contest situation is also playing out in Pretoria and Johannesburg, where the two parties are head-to-head according to local media projections.

The high stakes election was characterized by deadly violence in the lead up to August 3, but the voting went peacefully and the Acting National Police Commissioner Lieutenant-General Kgomotso Phahlane expressed gratitude for the cooperation of the people:

“As the South African Police Service we are very grateful of the executions of our plan. We did communicate our plans to the nation pre-, during- and post- elections.

We committed ourselves to deliver a safe and secure local government elections 2016 and our members did us proud and they delivered that.

We had an incident-free election process. We are grateful to the South Africans who responded positively to our call when we asked them to corporate and work together with the police.”

The ruling ANC have released a statement describing the August 3 elections as a ‘resounding success.’

1. They congratulated all South Africans for coming out peacefully to cast their votes.
2. The ANC is encouraged by the results that have come in so far.
Deputy Secretary General Jessie Duarte said: “We are expecting to do well. Everything we’ve done during our campaigning was speaking directly to the real issues that people are concerned about.”
3. ANC will continue to monitor results coming from the IEC and that they are targeting a decisive victory. “We are confident our people have spoken and reaffirmed that the ANC is the only party that can bring change to South Africa,” the statement concluded.

ANC thanks its supporters, claims 27 of 34 councils so far

“ANC expresses gratitude to all South Africans who voted. ANC thanks South Africa for the trust bestowed on us in 27 of 34 councils completed thus far,” tweet read.

ANC expresses gratitude to all SAns who voted. #ANCThanksSA for the trust bestowed on us in 27 of 34 councils completed thus far

The leading opposition Democratic Alliance are leading in Nelson Mandela Bay municipality. They have 53% as against the ANC’s 37% with 62% votes counted so far.

The ruling ANC wins in Nkandla – the rural area from where President Jacob Zuma comes. The area was hitherto held by the Inkatha Freedom Party (IFP).

The Democratic Alliance thanks its supporters

Facts worth noting about the local elections

The last local elections (also known a municipal elections) were held in 2011.

Democratic national and provincial elections have taken place every five years starting in 1994.

The eight metropolitan municipalities are:

These are IEC figures as at September 2015