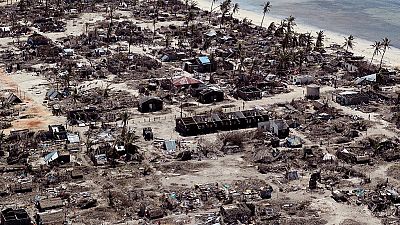 The federal government of Nigeria donated tons of medical supplies and half a million dollars to Mozambique and Malawi, following two cyclones that hit the southern Africa region in a space of a month.

The Foreign Affairs Minister Geoffrey Onyeama was in Malawi earlier this week to make the presentation before continuing to Mozambique. In both cases, he stressed that the support was a show of brotherhood and solidarity at a critical time for the two countries.

In Mozambique, Onyeama delivered the items at the National Institute of Disaster Managemlent in Maputo. It was received by Antonio Tchamo, Permanent Secretary at the Ministry of Public Administration and Civil Servants.

Nigeria’s donation comes on the back of extensive pledges by the United Nations, UN, and other international partners in ramping up financial and material support for the Mozambican government.

…equipment, and 500,000 US dollars to the Government of Mozambique in a show of brotherhood and solidarity to the people of Mozambique at this very critical time. #CycloneIdai AsoRock DigiCommsNG

Mozambique was hit by a first cyclone on March 14 drawing global attention to the southern Africa nation’s city of Beira. It left the country with a trail of “death and destruction” as the media tagged it.

Storms of covering a cyclone: Interview with South African journalist

The death toll passed a 1,000 at last count with increased calls for relief efforts. Before the flood waters could significantly recede, a cholera outbreak further complicated matters for the thousands that were stranded.

Then in late April Cyclone Kenneth also hit the country’s north. Like Idai, cyclone Kenneth left a trail of destruction in its path but not as destrctive as the former.

Assessments showed that the damage was extensive, and in the aftermath thousands of people lost their homes, their belongings and their livelihoods.

Cyclone Kenneth was one of the strongest storms recorded in mainland Africa. Although the area it hit was less populated than other parts of Mozambique, the damage and flooding along its path has been extensive.

At least 38 people have been reported dead and over 160,000 others have been directly affected.

…Malawai. Also extended Mr. President’s sympathy and commiserated with the Government and People of Malawi over the unfortunate incident that claimed many lives and displaced thousands of people. AsoRock DigiCommsNG #CycloneIdai