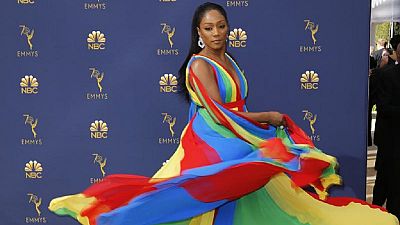 Eritrea celebrates its 28th independence day and it is the reason American comedienne Tiffany Haddish is heading back to the Horn of Africa nation to join the celebrations.

“I know everyone is excited, especially me, to be part of something historical and cannot wait to share this with the whole world”

The first hint of her journey to Asmara was via an Ethiopian Airlines post on Thursday evening as Tiffany boarded in Washington. On Friday morning, two photos posted by the airline showed Haddish aboard in one and in a group photo with staff in the other.

In a video making the rounds on Twitter, Haddish said: “Hello everyone, it’s me Tiffany Haddish and guess what, I’m going to Asmara for independence day. Hmmm

“I’m expecting good food, fun, camaraderie, see my family, my people; you know… just good times and I can’t wait to go to the island and see if I can get me one of the nice husbands.”

On the occasion of Eritrea’s Independence Day the renowned comedian/actress Tiffany Haddish on her way to Eritrea. #EritreaShinesAt28 pic.twitter.com/Uj0goVTYsm