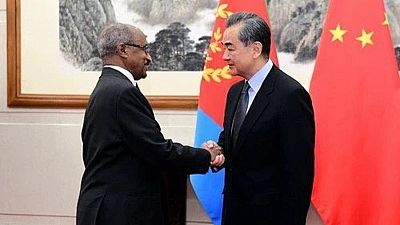 Foreign Ministers of Eritrea and China met in Beijing on Monday (May 6) with both sides committing to a mutually beneficial relation to both countries.

“Eritrea and China stand ready to build a healthy and strong partnership for the benefit of their two peoples,” a statement made by Eritrean Foreign Minister Osman Saleh when he met with his Chinese counterpart, Wang Yi.

The Information Minister, Yemane Meskel wrote on Twitter that Saleh and his delegation were in Beijing for a three-day visit.

“The two sides assessed their relations to date and discussed ways & means of boosting cooperation in various fields.

“FM Wang affirmed that China welcomed the positive developments in the Horn of Africa and underlined its readiness to help in the consolidation of the process underway,” Meskel added.

The Eritrean delegation after meeting with FM Wang are also scheduled to hold meetings with other government officials and heads of enterprises.

“Eritrea and China stand ready to build a healthy & strong partnership for the benefit of their two peoples”. This was affirmed by Foreign Minister Osman Saleh and his Chinese counterpart, Wang Yi, at the meeting in Beijing yesterday. pic.twitter.com/sHahoBeklm

This trip is the latest leg of a rejuvenated diplomatic engagement by Asmara. Minister Saleh along with presidential advisor Yemane Ghebreab have been the face of Eritrea’s resurgent diplomacy.

Eritrea was one of a handful of nations whose president was not in attendance during the Forum for China – Africa Cooperation held in Beijing in 2018. China’s relations with Africa continues to elicit claims that most nations are being wooed into debt trap.

Neighbouring Ethiopia, Djibouti and Kenya have substantive Chinese investments. Leaders of the three leaders were recently in China for the second Belt and Road summit.