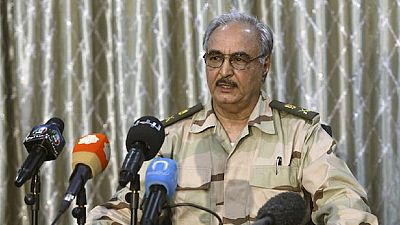 Eastern Libyan forces commander Khalifa Haftar urged his troops trying to take Tripoli to battle harder and teach their enemies an even bigger lesson, because the Muslim month of Ramadan that begins on Monday was a month of holy war.

His comments came just hours after the United Nations called for a week-long humanitarian truce following a month of fighting for the capital that has displaced 50,000 people, killed around 400, and badly damaged some southern districts.

Haftar had already defied the United Nations when he launched his Tripoli offensive a month ago on the same day U.N. Secretary-General Antonio Guterres was visiting the capital to prepare a national reconciliation conference.

Officers and soldiers in our armed forces and the auxiliary forces, I salute you in this glorious days and urge you with your strength and determination to teach the enemy a greater and bigger lesson than the previous ones, as we’ve always known you to do, till we uproot it from our beloved land.

Haftar’s Libyan National Army (LNA), which is allied to a parallel government in the east, has not been able to breach the southern defences of Tripoli, which is held by the internationally recognized government.

On an audiotape released by his force’s spokesman, Haftar said Ramadan had not been a reason to halt previous battles when he seized the eastern cities of Benghazi and Derna as he expanded his power and the country collapsed into chaos after the toppling of Muammar Gaddafi in 2011.

“Officers and soldiers in our armed forces and the auxiliary forces, I salute you in this glorious days and urge you with your strength and determination to teach the enemy a greater and bigger lesson than the previous ones, as we’ve always known you to do, till we uproot it from our beloved land,” Haftar said.

He did not mention the U.N. call for a truce.

In a statement earlier on Sunday, the U.N. Mission in Libya (UNSMIL) appealed for a truce starting on Monday morning at 0400 local time to coincide with the beginning of Ramadan.

As the United Nations issued its statement, artillery shelling could be heard coming from southern outskirts of the capital, where the LNA has been tying to breach defenses by Tripoli forces.

The renewed conflict threatens to disrupt oil supplies, drive increased migration across the Mediterranean to Europe, and scupper U.N. plans for an election to end rivalries between parallel administrations in Libya’s east and west.

“Our battles against terrorism in Benghazi and Derna did not stop in the holy month of Ramadan but we increased our determination and strength in this holy month,” he said.

Emad Badi, a Libya researcher, said Haftar might be trying to reach out to ultra-conservative Salafis. They are among his forces, but also have a presence in Tripoli.

Haftar’s LNA seized the sparsely populated but oil-rich south of the country earlier this year before turning on Tripoli last month.

In his speech on Sunday, Haftar again framed his battle as counterterrorism. His main backers are the United Arab Emirates and Egypt, which see him as bulwark against Islamist militants and chaos.