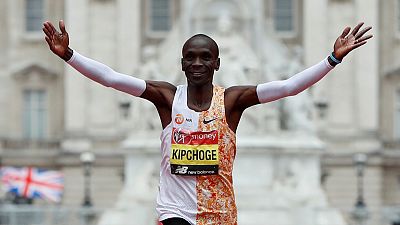 Kenya’s Eliud Kipchoge ran the second fastest marathon in history to win the 2019 London Marathon for a fourth time.

Having ran the first kilometre at world record pace out in front, Kipchoge clocked an identical 10km time as he did when breaking the world record in Berlin, before coming through the halfway point at 01:01:37.

Ethiopia’s Mosinet Geremew and Mule Wasihun finished second and third respectively behind Kipchoge, who finished 59 seconds shy of his world record of 2:01:39.

He broke his own London Marathon record set in 2016 by 28 seconds.

Kosgei beat defending champion and compatriot Vivian Cheruiyot to win for the first time in London.

She crossed the finish line in 2:18:20, almost two minutes ahead of Cheruiyot as Roza Dereje of Ethiopia finished third.

Kosgei is 25 days younger than Aselefech Mergia, the previous youngest winner, when she won the 2010 race.