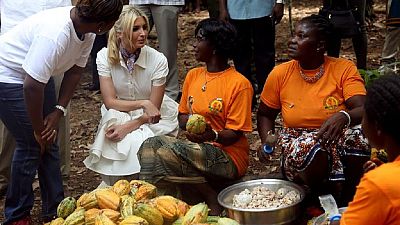 Advisor of the United States president, Ivanka Trump, is in Ivory Coast on the second-leg of her two-nation trip to Africa.

As part of her immediate engagements on arrival (April 16), she met with Ivorian Vice-President Daniel Kablan Duncan and top government officials.

During the meeting, the Ivorian Education Minister signed an order operationalizing a unit prioritizing women access to empowerment training and girl’s access to education.

The thrust of Ivanka’s trip has been around women empowerment efforts, a plank of the current White House’s Africa policy in sub-Saharan Africa which she is leading. She is accompanied by USAID administrator and other top government officials.

After a productive meeting w/ VP Duncan, I joined him as the Minister of Education signed an arrêté operationalizing a Gender Unit prioritizing women & girls’ access to quality education & training. President Ouatarra has committed to passing ALL U.S. MCC indicators by 2020.#WGDP pic.twitter.com/DGtAZk1AHW

On her final day of work, she visited a cocoa farm in Adzope, a town located in south-eastern Ivory Coast. In a tweet about her trip, she spelt out the impact – positive and negative – that women make yet suffer in the cocoa sector.

Accompanied by a government official, a visibly excited Ivanka is seen interacting with women on a cocoa farm. She is gifted a local garment and she takes a bite of raw cocoa.

She arrived in the Ivorian capital on Tuesday after completing two-day engagement in the Ethiopian capital, Addis Ababa. Whiles in Ethiopia she tasted coffee and met with Ethiopian president and Prime Minister as well as signing a U.S.-African Union cooperation agreement.

Today, USAID & I will visit a cocoa farm in Adzope!
▪️Women in Cote d’Ivoire own 25% of cocoa farms + form 68% of the cocoa labor force
▪️Women earn only 21% of income generated from cocoa production
▪️Women own less than 15% of continent’s land
We’re fighting for change. #WGDP