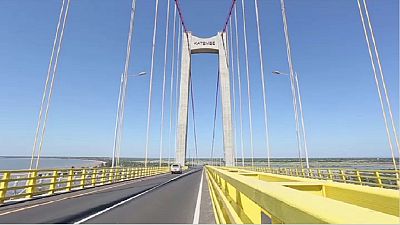 The Maputo-Katembe Bridge, Mozambique, would help improve people’s livelihood and boost the economy of the southeast African country.

The bridge now the longest suspension bridge in Africa,, which hovers across the Maputo Bay with a main span of 680 meters, was officially opened to traffic last November.

The three-kilometer-long bridge connects the capital, Maputo on the northern bank with its disjunct suburb of Katembe on the southern bank.

I'm buying the food from South Africa. I'm going to Maputo. Before it took maybe four to five hours to reach the border.

Gila local resident living in Maputo says Before the bridge was constructed, it took him about 2-3 hours by ferry. But now it takes only several minutes.

“I’m buying the food from South Africa. I’m going to Maputo. Before it took maybe four to five hours to reach the border. There was a long queue and then the road was bad. But now if you need to go to Boane borough, it’s easy,” said Seigo, Maputo resident.

The Bridge and Link Roads project will serve as the arterial highway that directly links capital city Maputo southward to the border with South Africa.

The Construction of the 785.8 million U.S. dollars project started in June 2014.With 95 percent of the funding provided by China through preferential and buyers’ loans.

According to the contractor, the project has generated to date 3,788 jobs for the locals and provided skills training opportunities for thousands of local employees.