Lab-grown meat could be on shelves in 5 years - scientists 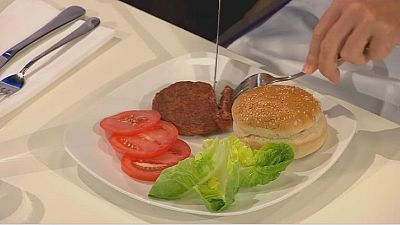 Lab-grown meat, cultured from the stem cells of animals, is considered by many to be a sustainable and ethical solution to the demands of the meat industry.

While it can be grown in small amounts – and at great expense – in laboratories, science is still trying to figure out how to produce enough meat to make it a viable alternative.

Tissue engineering experts at the University of Bath are developing a system where animal cells are grown on blades of grass. Dr Marianne Ellis, Senior Lecturer in Biochemical Engineering, said grass provided a perfect scaffold for the meat cells to latch on and grow.

“What we’ve seen in our lab is that the muscle cells that we are growing grow really well on grass and the great thing about grass in particular is it’s striated, there are there are lines on the grass – you can see them with your eye – and the muscle cells will actually align with this structure,” Ellis told Reuters from her lab at the University’s Department of Chemical Engineering.

Vascular biologist Mark Post from the University of Maastricht unveiled the world’s first lab-grown burger in 2013; made by knitting together around 20,000 strands of protein cultured from cattle stem cells in the lab.

But it’s a lengthy and costly procedure: cultured meat typically has a production price of about $20,000 per kilogram. Israeli bio-tech firm Future Meat Technologies told Reuters last year they had managed to reduce the cost to $100 per kg, and were working to get it down to $5 per kg.

Demand for meat is expected to double between 2000 and 2050, when the earth’s population is set to surpass nine billion. Proponents of growing meat in the lab say it is the only way to meet such demand without further harming the environment.

“The challenge is to grow cultured meat in a cost-effective way when a large enough scale where it can really achieve the goals of food security and addressing climate change associated with food production,” said Ellis.

The Bath research currently revolves around small bioreactors they have built to hold decellularised grass – colloquially called ‘ghost grass’ – where all the cells have been removed using detergents, leaving a platform for the meat cells to grow. It’s in these bioreactors that the team hopes to accelerate the growth of cells.

“We need to replicate the conditions found in the cow or the chicken that allows muscle to grow; so that’s partly the material that it’s grown on but also the nutrient solution that’s fed to it and the general environment that it’s grown in,” said Ellis.

“And that’s the bioreactor and that’s our area of expertise and that is how we are looking to address this scale up challenge,” she added.

The prospect of a slaughter-free steak, however, may be some way off. Cuts of meat like steak have connective tissue, blood vessels and fat cells which currently make it too complex to reproduce.

However, Ellis said she envisions simpler lab-grown meat products such as burgers and meatballs to be on supermarket shelves in the next five years.