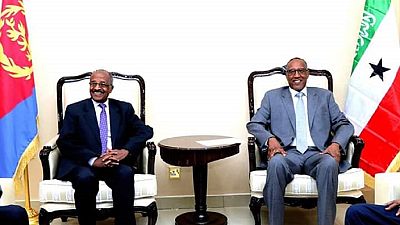 <p>A government delegation from Eritrea arrived in Hargeisa, capital of Somaliland for talks. Eritrean Information Minister, Yemane Meskel said the three-day visit was part of concerted efforts to boost regional peace.</p> <p>The delegation, the first ever from Eritrea to visit Somaliland, was led by Foreign Minister, Osman Saleh who was accompanied presidential adviser Yemane Gebreab.</p> <p>As at yesterday (March 18) the delegation held talks with Somaliland President Muse Bihi Abdi who expressed gratitude for the Eritrean initiative.</p> <blockquote class="twitter-tweet" data-lang="en"><p lang="en" dir="ltr">Eritrea’s delegation led by FM Osman Saleh met today in Hargeisa President Muse Bihi Abdi who expressed appreciation for the Eritrean initiative. The President briefed the delegation on the situation in, and the views of, Somaliland <a href="https://t.co/dtEzmc5eyT">pic.twitter.com/dtEzmc5eyT</a></p>— Yemane G. Meskel (@hawelti) <a href="https://twitter.com/hawelti/status/1107640625879490560?ref_src=twsrc%5Etfw">March 18, 2019</a></blockquote> <script async src="https://platform.twitter.com/widgets.js" charset="utf-8"></script> <p>According to Meskel, The objective of this first-ever Eritrean Government delegation visit to Hargeisa is to begin engagement with Somaliland and to buttress the quest for the promotion of regional peace. </p> <p>The delegation will have numerous meetings with a wide range of actors during the three-day visit, he added.</p> <p>In his remarks, FM Osman Saleh said: “We are sent by our president, Isaias Afwerki, at least to know the situation – what is going on in Somaliland. We have been away from the situation in the Horn of Africa for the last twenty years because we had a very bad situation.</p> <p>“A war was waged against Eritrea by <span class="caps">TPLF</span> regime and later it was followed by the sanctions on Eritrea and we were struggling to be free from all these subjugations.</p> <p>“No, at this moment, peace has prevailed in the Horn of Africa especially between Ethiopia and Eritrea, and now we have started our cooperation, so we said now we have been away and now it is time for us to go to Somaliland and look into the situation.</p> <p>“We have a meeting with the president and we had his briefing, very interesting, very important and also we tried to say that we wanted to know the situation. </p> <p>“So he explained all the political, the social and the economic situation of the country and now we will go back what we call the situations prevailing in Somaliland to my president,” he told reporters.</p> <blockquote class="twitter-tweet" data-lang="en"><p lang="en" dir="ltr">Met with the FM of Eritrea Hon. Osman Saleh. We discussed issues pertaining the bilateral relations between the two nations, regional economic integration, security and the political dynamics in the Horn of Africa. Agreed the two nations share common history and brotherly bond. <a href="https://t.co/ThjK3gudsm">pic.twitter.com/ThjK3gudsm</a></p>— Muse Bihi Abdi (@musebiihi) <a href="https://twitter.com/musebiihi/status/1107656053288779776?ref_src=twsrc%5Etfw">March 18, 2019</a></blockquote> <script async src="https://platform.twitter.com/widgets.js" charset="utf-8"></script>