About 32 killed as train derails in DRC's Kasai region 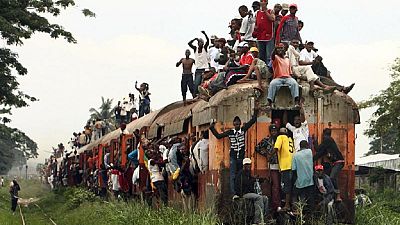 An estimated 32 people have been killed after a train derailed in the Democratic Republic of Congo, DRC’s, Kasai region. Over seventy others were reported injured.

The incident involved a freight train but which had people hanging on the sides. Children are said to be the majority of victims.

The police said a number of the wagons fell into a river with an active search and rescue operation being carried out.

The victim count is likely to mount as the search operation continues. Reports indicate that today’s incident is the third rail accident in the area in recent weeks.

The real cause of the accident has yet to be ascertained. Trains in Congo date back to the 1960s with lack of maintenance of tracks and other infrastructure usually the reason for such incidents.

At least 33 killed in the Democratic Republic of Congo freight train crash https://t.co/gB3yfgonjT