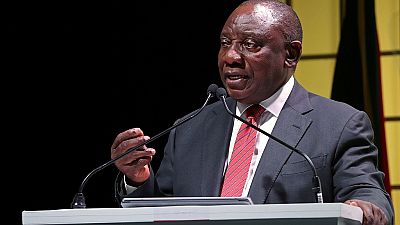 South Africa’s ruling African National Congress party (ANC) has been widely criticised for a submitting a list of potential parliamentarians that includes tainted politicians from the era of former president Jacob Zuma.

President Cyril Ramaphosa, whose pledge to tackle corruption is a centerpiece of the ANC’s election campaign, is first on a list of the party’s parliamentary candidates submitted to the country’s election commission. Deputy President David Mabuza and ANC chairman Gwede Mantashe are in second and third places.

Anybody who has not been found guilty by a court of law is on the list.

Under South Africa’s political system, the president is chosen by the assembly, and traditionally from the biggest party, which the ANC has been since the first post-apartheid elections were held in 1994.

After being elected by the assembly, the president is then required to resign his or her seat.

Registered political parties are required to submit candidate lists for the National Assembly and provincial legislatures to the Electoral Commission of South Africa (IEC).

34 political parties have indicated their intention to contest the May 8 election.

Zuma himself had been nominated to be included on ANC’s list, but reportedly rejected the nomination.

Zuma, 76, was forced out of the presidency in February 2018, his reputation stained by corruption, and currently faces 16 charges of fraud, graft and racketeering related to a 1990s arms deal struck when he was deputy president.

His allies however, who were implicated in several corruption scandals are included on the list.

Former finance minister Malusi Gigaba and ex-mines minister Mosebenzi Zwane, who have been implicated by evidence at the ongoing state capture commission of inquiry, are on the ANC list.

Zuma allies Nomvula Mokonyane, the environment minister who was recently implicated in graft at a corruption inquiry, and Bathabile Dlamini who was at the centre of a benefits payments fiasco, are named among the top 10 candidates on the list.

Political analyst says the inclusion of the politicians linked to corruption and poor governance, calls into question the ANC’s pledge to distance itself from people who have tarnished the reputation of the party.

“It says that despite what went on under Zuma, ANC branch members do not see any crisis. They are rejecting (President Cyril) Ramaphosa’s anti-corruption message by choosing Zuma allies.”

“The ANC’s candidate lists will undoubtedly not only showcase their disregard for good governance and the rule of law, but also the party’s utter disdain for women’s rights,” Malatsi said in a statement.

The ANC currently holds 249 seats of 400, according to the parliament website.

The ANC said it had chosen its candidates by a “rigorous, thorough and fair process”.

“There are concerns raised in the media about some of the candidates on our lists. Like all political parties our members are subjected to the law of the land. … The mere public mention of wrongdoing and corruption by an individual does not make that person guilty,” the ANC said in a statement.

ANC’s secretary general, Ace Magashule, said politicians could not be removed from the ANC list on the basis of allegations alone.

“Anybody who has not been found guilty by a court of law is on the list,” Magashule told local media.

IEC has until 19 March to advise parties of any non-compliance in respect of candidate lists, which must be rectified by 25 March.

Ramaphosa is trying to reverse a slide in voter support for the ANC, which has won every election since the end of white minority rule in 1994.

Analysts predict the ANC will win more than 50 percent of this year’s vote, but they differ over the expected margin of victory.

Investors want to see evidence that Ramaphosa is following through on his pledge to root out corruption, as it hurts business confidence and acts as a brake on economic growth.

“Ramaphosa’s strategy is to turn a blind eye to state capture when it comes to the election list and allow the criminal justice system to take people out after the election,” said Peter Attard Montalto, head of capital markets research at Intellidex. “However such a strategy is high-risk.”

South Africa: Zuma, Ramaphosa rally together ahead of May elections https://t.co/uuXlb3Z0oa