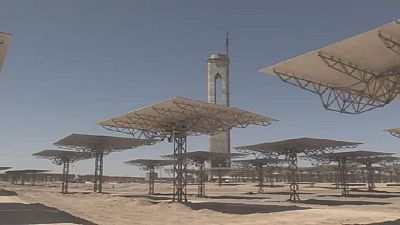 In the middle of the Atacama Desert in northern Chile, the first solar thermal power plant in Latin America emerges from the ground.

The project named Cerro Dominador, is a symbol of Chile’s ambitious energy transition, which aims to achieve 100% green energy production by 2040.

By 2020, the plant should produce power for 250,000 homes, using CSP technology capable of producing electricity for 17.5 hours without the need for the sun.

The tank contains molten salts that will be heated to 565ºC and will in turn be used to heat the water. Steam propels a turbine that produces energy when the sun is gone.

The technology is being used for the first time in Latin America, a part of the continent that is largely concerned with preserving the environment and that wants to invest in the development of renewable energy.

The project was built by the Spanish company Acciona and Abengoa, thanks to the investment of more than 800 million dollars from the American fund EIG Global Energy Partners.