African Champions League is gaining steam as defending champions Esperance of Tunis cross into the quarter-finals. But the Tunisians are not the only ones to have qualified with a match to spare before the end of the group stage.

In the CAF Cup, contrarily nothing is going well for the defending champions. It is a must win for Raja of Casablanca on the last day if they intend to join RS Berkane and CS Sfaxien, the first to qualify for the quarter-finals.

Massadio Haidara now says he is ready to defend Mali’s colours.An exclusively from the Franco-Malian defender, who particularly revisits the reason behind his previous refusal to play for Mali a few years ago.

On Tuesday, Manchester City hosts Schalke 04 while Atletico Madrid travels to Juventus Turin. And then on Wednesday, there is the clash between Bayern Munich and Liverpool, who shared the spoils in a goalless first leg at Anfield. Fc Barçelona will want a direct flight into the quarter finals but air traffic control says there is turbulence in the form of Olympic Lyon . 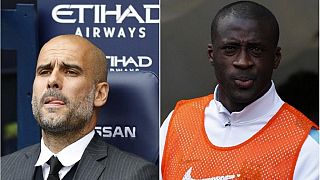