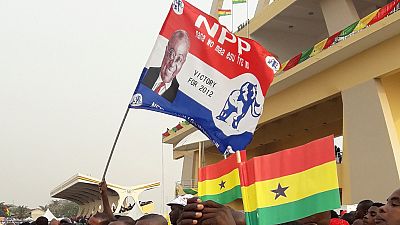 According to a Joy News investigative report, the NPP had been running, the group Eye Vigilante, at a center located in the capital, Accra, for the past two years.

The facility is located in an area marked as a ‘security zone.’ The investigation revealed that the militia had two offices in the building. A general office and one meant for its commander.

When the investigative reporter, Manasseh Azure Awuni, contacted the Interior Ministry about the existence of the group, it was confirmed that no such registered private security entity existed.

A private legal practitioner who spoke as part of the soon to be shown documentary titled: ‘Militia in the Heart of the Nation,’ said if verified, the move constituted a clear breach of the law.

Ghana, one of West Africa’s most stable democracies was recently rocked by electoral violence leading the president to constitute a body to probe the bloody disturbances at the Ayawaso West Wuogon Constituency located in the heart of the capital.

Even as the commission continues its hearing, Ghanaians are united on the need to root out vigilantism in the country’s politics. The president in two recent addresses – state of the nation, independence day – stressed his resolve to combat political thuggery.

The main opposition National Democratic Congress, NDC, and the NPP have both been complicit in forming party security who have often been deployed to unleash violence during polls.