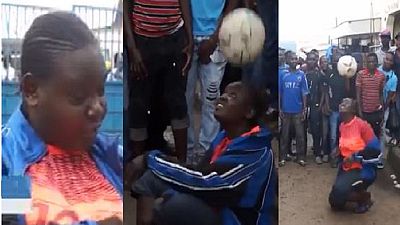 But the exploits of the woman seen in skirt and slippers deftly juggling, heading and controlling a football had for months prior done just that for a living – displaying her skills to earn money.

The now famed juggler is Hadhara Charles Mnjeja, the 29-year-old was in Malawi where she makes her living playing on the street, charging up to $5 for a two-minute performance.

I am able to support my family with this. I have two children at home and I can take care of them on my own thanks to this. That's why I need support.

“I am able to support my family with this. I have two children at home and I can take care of them on my own thanks to this. That’s why I need support.”

She says her talent stems from years of intense practice. Her display has earned here trips to other African countries, such as South Africa, Ethiopia, Cameroon, Gabon, Nigeria, Malawi, Mozambique and Burundi.

One particular video which shows a typical performance, was widely retweeted and liked after being shared by Twitter user Akin Sawyerr on February 16. He had titled the video: “Talent is evenly distributed, opportunities are not”

Akin’s tweet caught the attention of the US President Trump, who shared it with his 58.4 million followers with the description “Incredible!”

#Tanzania-n woman uses #football #juggling skills to feed her family. Hadhara Mjeje has travelled to Cameroon, Gabon, Burundi and Malawi to showcase her skills. She charges $4 for 2 minute performance and $50 for a day pic.twitter.com/ZxEbx9LDKb