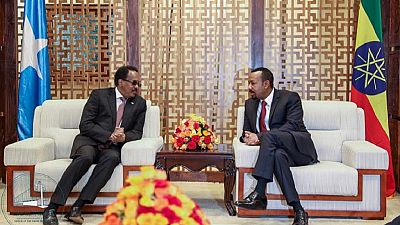 He was received at the Bole International Airport by hist host Prime Minister Abiy Ahmed. Both leaders are expected to hold talks on bilateral and regional issues.

“The visit has come as part of Prime Minister Dr. Abiy Ahmed’s initiative for regional peace and security and economic integration in the Horn of Africa region,” the PM’s office noted.

Farmaajo’s last visit to Ethiopia was in February 2019 when he joined heads of government for the 32nd African Union, AU, summit.

He visited last year flying to Bahir Dar in the Amhara region to join Abiy and Eritrean President Isaias Afwerki for the second edition of a tripartite summit between the three countries.

He was billed to visit in February when Somaliland leader was also due in Addis Ababa. Despite official confirmation of the meeting between Farmaajo and Muse Bihi, his participation did not materialize.

It is not known if the current talks will include conditions for a possible meeting with leader of Somaliland – the semi-autonomous region of Somalia.

Ethiopia and Somalia have a long history with Addis Ababa in the recent years accused of being behind instability in Somalia even though Ethiopian troops continue to serve under the AU mission, AMISOM.