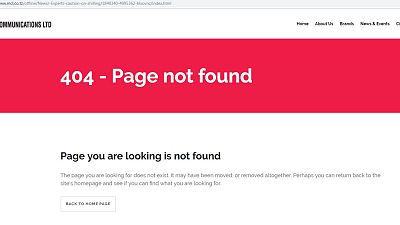 <p><strong>Tanzania’s Citizen newspaper is currently not available offline and online, after it became the first victim of the 2017 Statistics Act which prohibits any publication of statistical information different from the official figures.</strong></p> <p>The Tanzanian authorities suspended the newspaper for seven days, accusing it of spreading false information about the devaluation of the Tanzanian shilling.</p> <p>The Citizen belongs to the Mwananchi Communications Ltd group, considered a benchmark in the Tanzanian media landscape, which is increasingly facing various pressures from President John Magufuli’s government.</p> <p>“In this article, you deliberately published false and misleading information to make Tanzanian public believe that the Tanzanian shilling has depreciated compared to the last three years,” justifies the media registration body in a letter to the Mwananchi group dated Wednesday and seen by <span class="caps">AFP</span>.</p> <p>The body accuses the newspaper of having thus violated “the financial regulations and principles according to which the value of the Tanzanian currency is given by the Central Bank”.</p> <p>Patrick Kipangula, the registrar of newspapers, also accused the newspaper of printing of a number of misleading articles that “largely violate media ethics and incite citizens against the government.”</p> <h2 style="font-size:16px;">Citizen’s offending article</h2> <p>In its article published on 23 February, the newspaper invited its readers to “closely monitor the fall of the shilling”.</p> <p>The Citizen said that, according to a survey it conducted among exchange offices and banks, the dollar was selling at 2,415 shillings against 2,300 at the official central bank rate.</p> <p>As a result of tighter foreign exchange regulations, the US dollar is becoming increasingly rare in Tanzania, a situation that is hitting the tourist city of Arusha (north), where exchange offices have been closed since late 2018.</p> <a style="font-size:16px; font-color:yellow;" href="http://www.africanews.com/2018/11/20/tanzania-s-army-central-bank-raid-forex-shops-in-arusha/"target="_blank"><span class="caps">READ</span> <span class="caps">MORE</span>: Tanzania’s army, central bank raid forex shops in Arusha</a> <p><strong><em><span class="caps">AFP</span></em></strong></p>