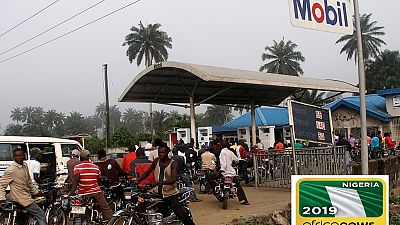 Nigerian fuel suppliers, bus operators and some airlines are offering incentives for people to travel to vote in presidential elections this Saturday, including cutting petrol prices and discounts.

The electoral commission announced the delay early last Saturday just Nigeria’s 84 million registered voters were preparing to head to the polls. The election is now scheduled to take place this Saturday.

Both of the main parties have expressed concern that this would result in a reduced voter turnout, in part because people who were registered to vote in a different part of the country to where they live would be unable to afford to travel after a wasted trip last Saturday.

Information Minister Lai Mohammed said the Independent Petroleum Marketers Association of Nigeria (IPMAN) had cut the price of petrol at the pumps to 140 naira per litre from 145 naira. The discount will apply from Friday to Monday.

Mohammed also told reporters the National Union of Road Transport Workers, which has about 2 million members who operate bus routes nationwide, had agreed to provide discounts to travellers “looking to travel to their respective voting points”.

Two airlines had also offered discounts to people who showed their voting cards.

President Muhammadu Buhari faces a tight contest against businessman and former vice president Atiku Abubakar, the main opposition candidate, to lead a country that has Africa’s largest economy and is its top oil producer but is plagued by corruption and a wide gap between rich and poor.

The election has been fought over Buhari’s handling of the economy amid fragile growth and growing unemployment as Nigeria recovers from a recession in 2016.

Rising insecurity, notably in regions under attack by Boko Haram and other Islamist militants, is also a big worry.