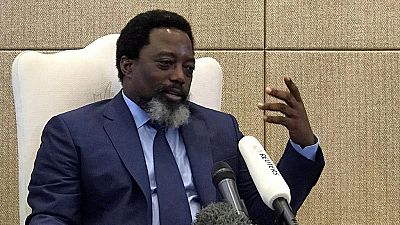 In yet another indication that his political story is not over, Joseph Kabila, the ex-president of Democratic Republic of Congo on Wednesday made the the leaders of his FCC coalition sign a loyalty pledge.

Kabila’s Common Front For Congo remains the strongest force in parliament, garnering an overwhelming majority of seats in the December 30 vote which yielded a presidential win for opposition leader Tshisekedi.

Nearly a month after the reins officially changed hands, newly-retired Kabila gathered the leaders of the coalition’s 18 member parties at his farm in Kingakati, near Kinshasa, the FCC said in a statement.

We reaffirm our faithfulness and our loyalty to His Excellency Joseph Kabila Kabange, honorary president of the Republic.

It added that he got them to sign an “act of commitment” with seven main points.

Topping the list: “We reaffirm our faithfulness and our loyalty to His Excellency Joseph Kabila Kabange, honorary president of the Republic.”

Tshisekedi’s own Union for Democracy and Social Progress (UDPS) only garnered 32 seats in the National Assembly.

He has yet to appoint a prime minister and has provisionally been working with the governing team left behind by his predecessor.

The FCC party leaders gathered Wednesday agreed to transform the entity from an “electoral coalition” into a “political platform of government”.

This does not mean it will revisit the power-sharing accord discussed with Tshisekedi, said the FCC.

According to Lambert Mende, government and FCC spokesman, Tshisekedi and Kabila shared “an ideological proximity”. He described them both as “social democrats.”

Tshisekedi’s election marked DR Congo’s first peaceful change of power since its independence from Belgium in 1960.

He took over from Kabila who had held the presidency for 18 years.

Another opposition candidate, Martin Fayulu, disputes the legitimacy of the December 30 elections.