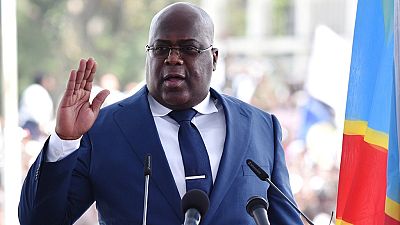 The president of the Democratic Republic of Congo (DRC), Felix Tshisekedi says his government will work with the United Nations to draw up a withdrawal plan for the MONUSCO peacekeeping mission.

Relations between MONUSCO and DRC’s government during Kabila’s tenure were tense, and the latter consistently called for the implementation of a 2010 resolution that ‘required the United Nations Secretary General to prepare a withdrawal plan’.

In his first formal meeting with diplomats held on Friday, Tshisekedi called for a “better armed” UN peacekeeping force that can operate in the restive parts of DRC.

He reiterated his predecessor’s position that it was time to draw up a withdrawal plan for the MONUSCO peacekeeping mission, which has been present in DRC for 20 years.

Tshisekedi, who was inaugurated last month says the UN troops “should be reduced and better armed and prepared” to fight the numerous rebel and militia groups which hold sway over large areas of the country.

Tshisekedi said he wanted a mutual exchange with diplomats and foreign allies “as soon as possible,” but underscored Kinshasa would “protect its political independence… and sovereignty.”