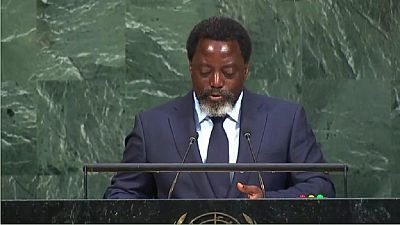 Outgoing president of the Democratic Republic of Congo (DRC), Joseph Kabila addressed the United Nations General Assembly on Tuesday, reassuring delegates of his commitment to conduct credible elections in December.

Kabila was addressing the general assembly for the last time, having agreed last month not to defy term limits by running for re-election.

Several world leaders started delivering their contributions to the United Nations General Debate on Tuesday. This year’s session is being held under the theme “Making the United Nations relevant to all people: global leadership and shared responsibilities for peaceful, equitable and sustainable societies.”

Everything will be done in order to ensure that these elections are peaceful and credible.

The General Assembly is uniquely the only branch of the UN structure in which all 193 member states have equal representation: one nation, one vote.

Kabila, in his speech to the gathered delegates, addressed three key issues as follows;

DRC has never known a peaceful transition of power since independence from Belgium in 1960, and Kabila’s decision to step down has raised hope that history could be made in December.

Addressing the General Assembly, Kabila said his government was committed to the electoral process depite the challenges of holding elections in his vast country.

“I now reaffirm the irreversible nature of our decision to hold the elections as planned at the end of this year.”

“Everything will be done in order to ensure that these elections are peaceful and credible,” said Kabila.

Kabila, who has has ruled since his father’s assassination in 2001, is backing Emmanuel Ramazani Shadary in the long-delayed Dec. 23 poll.

Kabila vowed to “oppose any interference in the electoral process under way” and said DRC would cover the full cost of the elections which has involved a complicated voter registration.

The United States, France and Britain had urged Kabila to state clearly that he would not seek another term amid fears that his failure to step aside could trigger violence.

The Security Council is planning to visit the DR Congo before the elections, possibly in October, as concerns run high over a risk of election violence.

In his address, Kabila renewed his call for the withdrawal of the UN peacekeeping mission MONUSCO, the UN’s biggest peace operation with some 17,500 troops and police, from his country.

Kabila in January this year said there was a misunderstanding between Kinshasa and the United Nations which he accused of seeeking to co-manage DRC.

DRC is Africa’s top producer of copper and the world’s leading miner of cobalt, which is prized for its use in batteries for electric cars and electronics.

The vast mineral-rich country has however been wrecked by conflict in the east and Kabila’s security forces have been accused of resorting to excessive force against the opposition.