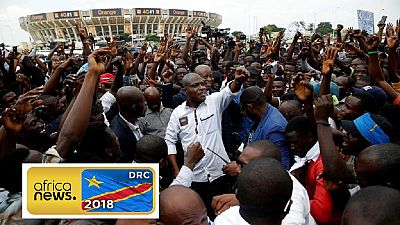 Losing candidate in the Democratic Republic of Congo’s disputed elections, Martin Fayulu, is expected in the town of Butembo today for a rally.

Fayulu is expected to reecho his message of peaceful resistance to supporters and to assure them that the fight to have the will of Congolese voters was not going to stop.

“He will take the opportunity to congratulate them on the high sense of civic spiritedness they have shown in organizing their own election in response to the (voting ban by) CENI,” a statement from an official source said.

CENI, the DRC’s elections body, cancelled polling in Butembo and Beni over an Ebola-outbreak in both places – known to be opposition strongholds.

People in the two towns lined up on the day of the vote and cast mock ballots whose results they promised to submit to CENI to be included in the result tallies.

Voting in the December 2018 polls was also suspended in Yumbi where inter-ethnic violence claimed lives of hundreds with days to the polls. CENI said the three places will cast their ballots in March 2019.

The December 2018 vote produced a new president in the person of Felix Tshisekedi even though multiple independent observers disputed the results which showed that Fayulu was the winner.

A Constitutional Court challenge filed by Fayulu’s Lamuka coalition was dismissed paving the way for the swearing in of Tshisekedi.

The handing over became the first time in DRC’s history that power was peacefully transferred. The country now has a living ex-president in Joseph Kabila who ruled for 18 years.