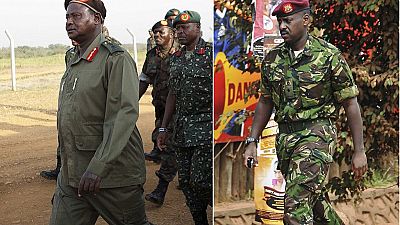 Uganda’s president Yoweri Museveni last week promoted his son, Muhoozi Kainerugaba to the rank of Lieutenant General, which is the second highest rank in the country’s army.

Muhoozi’s promotion from the rank of Major General, which he had held for nearly three years, was part of over 2,000 promotions confirmed by the president, who is also the Commander-in-Chief of Uganda People’s Defence Forces (UPDF).

“The President and Commander in Chief of the Uganda Peoples’ Defence Forces has confirmed the promotions of 2,031 UPDF personnel to various ranks,’‘ read part of a statement issued by the defence spokesperson.

I don’t have the ambition to be president.

Muhoozi’s promotion is likely to intensify speculation that the president is grooming his son to succeed him.

Proponents of what has come to be known as the ‘Muhoozi Project’ in Uganda argue that the first son has been fast-tracked through the army hierachy, as a way of grooming him to control the armed forces and eventually take over as head of state.

Below is a timeline of Muhoozi’s progression through different ranks and positions within the army and state structures.

In 2013, the then coordinator of intelligence agencies in Uganda, General Sejusa alleged that individuals opposed to the alleged ‘Muhoozi Project’ were being targeted for assassination.

Sejusa, in a letter that was leaked to and published by private media outlets, Daily Monitor and Red Pepper, alleged that president Museveni and his closest family members were plotting to install Muhoozi as president.

The army has on several occasions defended Muhoozi’s promotions, saying he has earned them, and insisting that the army’s promotions board is not influenced by president Museveni.

‘‘Muhoozi’s promotion and progress has been normal. He is a disciplined, dedicated and highly trained officer who has been serving with us for a long time,” the acting army spokesperson Capt. Chris Magezi said in 2012.

The president of Uganda serves as head of state and Commander-in-Chief of the Armed Forces, with authority to appoint the leadership of the army including the army chief and his deputies.

Muhoozi himself has cited completion of courses and operational experience as some of the merits he has to justify his promotions to positions of command in the army.

‘‘Courses prepare you for the next level of command, which comes with a rank…all the units that I have commanded have been in operations, so I have the prerequiste operational experience,’‘ Muhoozi said in an interview with the national broadcaster.

Length of service, age (where applicable), results of promotional exams by the defence forces council, character, discipline and performance are some of the other factors considered when promoting officers.

Muhoozi has on several occasions distanced himself from reports of the succession plot, saying he is too busy with military work to nurse political ambitions.

‘‘I don’t have the ambition to be president. I am very happy being in the military and that is where I intend to stay for some time,’‘ Muhoozi said following his promotion to Major General in 2016.

‘‘It [Muhoozi Project] doesn’t exist, non-existent – that is a red herring. You have never heard of a message where I promote myself, it is always from the promotions board. That is the process in the military.’‘

Feasibility: can Muhoozi succeed his father?

In an interview with Al-Jazeera in 2013, Museveni said the question of whether he can be succeeded by his son, can only be answered by ‘Muhoozi and the people of Uganda’, adding that ‘it is not in the short run’.

The president also ‘advised’ his son to go through the procedures laid out in the constitution if he is interested in the presidency.

The 1995 Uganda constitution stipulates that a president of Uganda must be a person elected by the citizens in a popular vote under universal adult suffrage.

When sons succeed their fathers

If Muhoozi were to succeed his father as president of Uganda, it would not be the first time it was happening in Africa.

In Gabon, the current president Ali Bongo succeeded his father, Omar Bongo Ondimba, after grooming that included being handed a cabinet position.

In Equatorial Guinea, Teodorin Nguema Obiang is a possible successor to his father, president Teodoro Obiang Nguema, who is currently Africa’s longest serving president, having assumed office in August 1979.

In 2016, president Nguema promoted his son Teodorin to the position of Vice President in charge of defense and security.

Other first sons that led their countries include Joseph Kabila in the Democratic Republic of Congo, Faure Gnassingbé of Togo and Kenya’s Uhuru Kenyatta.