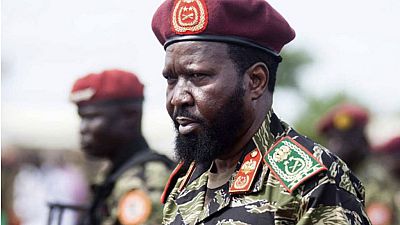 Stephen Buoy Rolnyang is charged with “treason“offences related to insecurity” and for disobeying his hierarchy,” said deputy spokesman for the South Sudanese army, Santo Domic Chol.

The general was arrested in May 2018 in Mayom, in the former Unity State (north), after refusing to report to army headquarters in Juba as ordered, according to the same source.

It is the prerogative of the Commander-in-Chief of the Army and the Chief of Staff to ensure that justice is done in matters relating to insecurity.

“It is the prerogative of the Commander-in-Chief of the Army and the Chief of Staff to ensure that justice is done in matters relating to insecurity,” the spokesman said.

However, a trial against such a high-ranking officer is extremely rare in Southern Sudan. This is only the second time a general has appeared before a court for treason since the beginning of the civil war in 2013.

In early 2014, a Juba court tried four high-ranking politicians, including two generals, for attempted coup d‘état, who then created the influential “former political prisoners” movement, which signed the 2018 peace agreement. They were then released without having served their sentence and pardoned.

General Buoy’s defence obtained a ten-day postponement of the trial on the grounds that the court was composed only of members of ranks lower than their client, who has the right to demand that the President of the Court have the rank of general.

The conflict, marked by ethnic atrocities and the use of rape as a weapon of war, has killed more than 380,000 people according to a recent study, and forced more than four million South Sudanese, or nearly one third of the population, to flee.