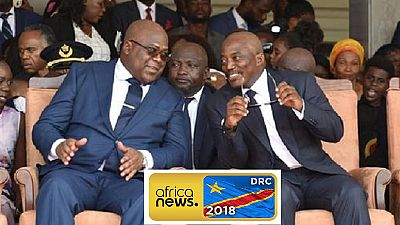 The results were subject to confirmation by the Constitutional Court even if there was no challenge to the outcome.

But a challenge was on the cards as Fayulu and the Lamuka coalition filed papers calling for the cancellation of the results. Fayuku had spoken in harsh terms calling the result a constitutional coup.

After filing of submissions by the petitioners and the respondents the court dismissed the petition with a majority decision. The judges had by their decision endorsed the election of Tshisekedi as president-elect of the DRC.

In the days that followed, Kinshasa was at the heart of several discussions at the regional and continental level.

The Southern Africa Development Community, SADC, the International Community for the Great Lakes Region, ICGLR; and the African Union, AU; all expressed reservations about the outcome.

More than once, there was talk of a recount of the polls which was supported by Fayulu who still insisted that he had won 61% of the votes with Shadary and Tshisekedi coming second and third respectively.

An AU delegation that was meant to visit DRC had asked the court to stay its ruling on the petition to enable talks but Kinshasa stated categorically that it was not interested in the AU position but will welcome the delegation.

Eventually, the result was announced with about 24-hours to the AU visit. The body subsequently postponed its mission and has yet to communicate if it ever will go to the DRC over the polls.

Despite Tshisekedi’s historic win, political watchers surmised that he was on his way to being a possibly lame duck or placeholder kind of leader. His party had the third-highest seats in the 500-seat legislature.

With the FCC having secured more than half of seats in the legislature, he had no option than to pick a Prime Minister from the FCC. With Kabila’s power over the party, he was set to pull strings even whiles out of office.

Tshisekedi’s main coalition partner Vital Kamerhe was planned to be the Prime Minister if CACH won the vote but with the legislative dynamics, Kamerhe has been appointed Chief of Staff – one of the new president’s first moves.

Felix Tshisekedi won a seat that eluded his late father, he won a legislative seat once but gave it up over principle – that the elections at the time was tainted.

He is however projected as winner of an equally tainted process that reflects the will of those in power rather than that of the popular will of the Congolese who queued to cast their ballots.

Kabila became equally a historic figure in the annals of the country’s politics, serving his two terms – overstaying, but leaving eventually after peacefully handing over to an opposition candidate.

He admitted that mistakes would have been made in his time at the helm but stressed that there had also been significant gains. He also rallied support for his successor adding that he was happy that an opposition candidate had won.

The world looked on with relief as Kabila embraced Tshisekedi who was handed authorities of state to a cheering crowd at the Palais de la Nations in the capital Kinshasa.

Congolese happy with the result and those embittered for a reason or the other have significant takeaways – Kabila finally leaves, opposition wins and more than anything, a tensed process passed off relatively well.