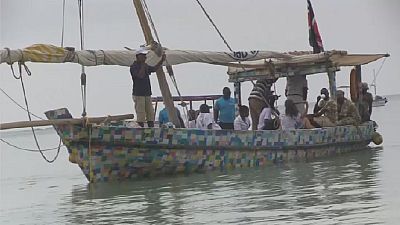 A traditional dhow made entirely of trash and tap goes on an expedition along the Kenyan coast to raise awareness of the harmful effects of plastic waste.

The dhows, with their swollen triangular veils, are an icon on the Kenyan coast, having crossed these waters of the Indian Ocean for about 2,000 years.

With its characteristic triangular sail, this boat, having embarked on an expedition along the East African coast, has almost everything from traditional dhow.

Ali Skanda is builder of the ‘Flipflopi:’ “We had this dream of doing plastic dhow, as we are doing so much in the world, and we feel it’s our responsibility to make this solution, because we are polluting our environment, many creatures are suffering from this jungle of plastic.”

The Flipflopi was built thanks to plastic waste collected especially on Kenyan beaches.

With the goal of raising awareness on the devastating effects of plastic pollution, Flipflopi began a 500-kilometer trek on Thursday in Lamu, north of the Kenyan coast. It is expected to reach its final destination, the Zanzibar Island, on February 6. –

The rest of the boat, was built using 10 tons of shredded plastic and then molded. Only the mast is made of wood.

The hull was then covered with 30,000 sandals “tong” garish colors, also picked on the beaches, which gave their name to the boat (these sandals are called flipflop in English) and gives it the appearance of a multicolored patchwork.

According to Ben Morrison, founder of the Fliflopi project, “it seems so simple to me, so obvious the motivation is just to share something positive, we wanted to have a colourful, beautiful message and that’s what the Flipflopi dhow is, so it’s really clear, positive message about the value of plastic and that’s what we’ve built.”

The Flipflopi was built 9 years ago at Lamu by traditional Dhow builders, using simple techniques that can be easily reproduced.

Like many countries around the world, where plastic bottles, bags and straws are only used once and thrown away, Kenya suffers the harmful effects of plastic pollution.

With more than 12 million people working in the fisheries sector in Africa, and many others dependent on fish for their food, marine pollution, remains a real threat to the world.