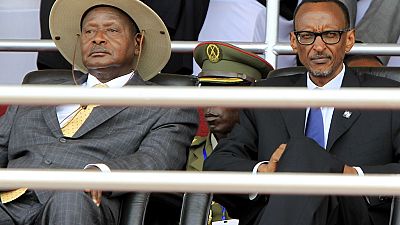 <p>A military court in Uganda has charged eight security officers for their involvement in the abduction and illegal repatriation of Rwandan asylum seekers to Kigali.</p> <p>The men, among them a military colonel and seven police officers, are suspected of involvement in forcibly handing over former security officer Joel Mutabazi and his brother Jackson Kalemera to Kigali in 2013.</p> <p>The two men had been granted asylum in Uganda and Human Rights Watch at the time accused the Kampala of having “utterly failed” to protect Mutabazi, who was at “serious risk” of persecution in his home country.</p> <p>“The eight officers, one a military officer and seven police officers appeared before the general court martial and were charged with abducting and repatriating Rwandan asylum seekers from Uganda without authorisation,” military prosecutor Major Raphael Magezi told <span class="caps">AFP</span>.</p> <p>Arrested in June 2018, the eight were present at the court hearing, which took place on Tuesday, he said.</p> <h2 style="font-size:16px;">Frosty Rwanda-Uganda relations</h2> <p>After being sent back to Kigali, Mutabazi — who was formerly one of Rwandan President Paul Kagame’s bodyguards — was imprisoned on terrorism and murder charges and is currently serving a life sentence.</p> <p>And his brother Kalemera disappeared after charges against him were dropped in 2015.</p> <p>Opposition dissidents believe he was murdered.</p> <p>Ugandan political scientist Mwambutsya Ndebesa told <span class="caps">AFP</span> the court case was a further sign of frosty relations between Uganda and Rwanda.</p> <p>“It is a warning sign to Rwanda to stay away from meddling in Uganda’s internal affairs,” he said.</p> <p>There have long been complex ties between the two countries, with Uganda hosting Rwandan refugees since an outbreak of ethnic violence in 1959 in which thousands of Tutsis were killed or fled the country.</p> <p>One of those refugees was Kagame, who went on to serve as spy chief for Uganda’s Yoweri Museveni before joining a rebel force which captured Kigali and ended the 1994 genocide in which 800,000 people, mostly Tutsis, were killed.</p> <p>Ties between Kampala and Kigali soured during the war in neighbouring Democratic Republic of Congo, with their two armies facing off in northeastern <span class="caps">DRC</span> in 2000.</p> <p>In recent years, accusations of espionage by Uganda, and Rwandan claims Kampala is backing anti-Kagame rebel groups have further chilled ties.</p>

It is a warning sign to Rwanda to stay away from meddling in Uganda's internal affairs.