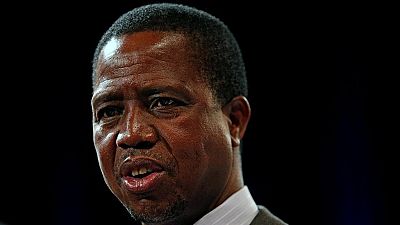 Zambia’s president Edgar Lungu has cautioned the country’s soldiers to respect hierarchy and desist from abusing their power.

Lungu, who fired the army commander and his deputy, on Monday, addressed the soldiers at the swearing-in ceremony of the new military chiefs.

He did not give reasons for removing Lieutenant-General Paul Mihova but cautioned his successor, William Sikazwe, not to abuse the authority of the office and to respect the hierarchy.

Remind the men and women in uniforms that discipline is about respecting the hierarchy of power.

“(The) Zambia army is renowned in Africa and beyond to have very disciplined officers and I expect you to continue maintaining that discipline,” Lungu told the new army boss shortly after he swore him in.

“Remind the men and women in uniforms that discipline is about respecting the hierarchy of power.’‘

“I don´t expect anybody to abuse that power of responsibility,” Lungu said during the ceremony broadcast on state radio.

Mihova was appointed head of the army in 2011 by the late president Michael Sata.

His deputy, Major-General Jackson Miti, was only recently appointed to the second most powerful position in the army.

President Lungu has been accused of cracking down on dissent since winning a contested election in 2016.

On December 7, Lungu overcame an opposition challenge to win a Constitutional Court ruling allowing him to stand for a third term in 2021.

Between July and October he had imposed a state of emergency, giving police additional powers including the ability to prohibit public meetings, detain individuals for longer than usual and impose curfews and restrict movements, which the opposition said was meant to intimidate their supporters.

Zambia faces challenges in the form of mounting debt and low prices for its commodity exports.