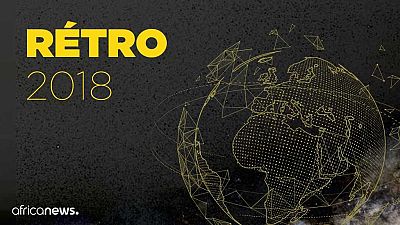 A special tab on the Africanews homepage ‘2018 Review’ is LIVE with a pool of articles and photo stories looking back at the year. We are using an alphabetical arrangement in respect of country reviews. This part concentrates on Namibia to South Africa.

The southern African nation of Namibia had land at the centre of a national discourse as it moved to expropriate land.

Windhoek was largely following South Africa’s heated land debates that saw parliament vote to not just expropriate land but to do so without compensation.

Germany also agreed to return http://www.africanews.com/2018/08/29/photos-germany-returns-namibia-genocide-skulls/ skulls of Namibians taken away decades ago during the pre-independence era. A Namibian government delegation received the remains at a church service in the German capital, Berlin.

There are thought to be hundreds of Namibian skulls in Germany, collected from its former colonies Namibia, Cameroon, Togo and Rwanda.The bones had been sent to Germany for now-discredited research to prove the racial superiority of white Europeans.

The 2018 World Press Freedom Index showed that Ghana dethroned Namibia who were tops in 2017. Completing the top three slots for Africa were Namibia in 26th and South Africa in 28th slot.

Niger had two terrorism related issues to deal with, all year round. President Mahamadou Issoufou was present at most G5 Sahel meetings over the course of the year.

Late this year, he was again in meetings related to Boko Haram. Countries in the Lake Chad basin met to dilate on efforts to root out Boko Haram. Headed by Nigeria’s Muhammadu Buhari, it was attended by Chad’s Idris Deby, Cameroon PM Philemon Yang and Issoufou.

Issoufou was also central on the issue of migration. Hosting European Union delegations to discuss how to tackle the issue. Niger and Chad are main transit points for illegal migrants.

President Buhari in early 2019 stated his decision to run for a second and final term. The ruling APC has since endorsed his candidature. He is yet to hit active campaigning mode at least not like his former ally turned main opponent.

Atiku Abubakar left the APC to return to the main opposition PDP. He won the party’s presidential ticket at a Congress held in the southeast. He has also picked a former governor from the region, Peter Obi, as running mate.

A mass defection of lawmakers from APC to PDP also saw heads of the legislature defect. Saraki, Senate president run for the presidential ticket but lost to Atiku.

Boko Haram raided a girls school in Dapchi, northeastern Borno state. They took scores of the girls but agreed later to return all but one of them. Leah Sharibu, who refused to denounce her Christian faith.

The group also continued its attacks on military installations and also by deploying female suicide bombers, some of who were intercepted by the army.

Communal clashes between farmers and herders especially in the middle belt led to massive loss of lives. Those deaths largely help keep Nigeria top the list of most terrorised African country.

Factional leader Abubakar Shekau also reemerged. Buhari undertook an official visit to the White House, first leader from sub-Saharan Africa to do so under Trump.

Under the AU chairmanship of President Paul Kagame, Kigali hosted the launch of the historic Africa Continental Free Trade Area which aims to unite Africa at the level of trade.

It was also a good year for two female Kagame critics. Victoire Ngabire was released from jail on a presidential pardon whiles Diane Rwigara and her mom were acquitted by a court in a case of forgery and insurrection.

Foreign Minister Louise Mushikiwabo also contested for and won the Secretary General position of the La Francophonie – a body puts all French speaking countries under one umbrella.

The mayor has since been replaced. His position is occupied by the first female mayor in decades. She was a deputy to Khalifa and has promised to continue his legacy.

Senegal also opened Africa’s first modern museum of civilisations. A project that was funded by the Chinese.

Legislative polls were also held with the ruling coalition maintaining its majority despite a concerted opposition effort. Ex president Wade won a seat but relinquished it after the vote.

The island nation held on to its lead in two areas – Visa openness and good governance rankings.

The AfDB’s visa openness index of 2018 ranked Seychelles along with Benin and Rwanda as Africa’s most welcoming of Africans.

The Mo Ibrahim Index for 2018 also noted that Seychelles was one of the continent’s most efficiently governed countries.

Maada Bio has been quick off the mark with education and te fight against corruption. A free basic education scheme started this year, free tuition has also been announced for specific varsity courses in public institutions.

There is an inquiry into issues of corruption from the last government. Government also cancelled an airport contract with China with reason that it did not need the said facility.

The president also met with Senegalese born US music star Akon on sidelines of UN General Assembly where government pledged support for a project the musician planned to launch in the capital, Freetown.

Somalia emerged as one of the winners following the Ethiopia – Eritrea peace accord. Eritrea reestablished all relations with Mogadishu whiles Ethiopia promised to avoid meddling in its affairs.

President Farmaajo also entered trilateral agreements with his two counterparts at two summits – Asmara and Bahir Dar. Somalia despite its own sanctions, called for lifting of Eritrea sanctions by the United Nations Security Council.

Allied to Farmaajo’s trilateral agreements, MPs filed a motion of impeachment accusing him of usurping powers of parliament with those deals. The motion has since been withdrawn.

The Federal government was also found wanting after a former Al-Shabaab leader was passed to run for presidency of a regional state. Mukhtar Robow was arrested days to the vote accused to smuggling arms. The vote has taken place whiles he is still being held by authorities in Mogadishu.

Somalia was Africa’s second most terrorised country after Nigeria. Much of its terror inflicted by al-Qaeda linked Al-Shabaab especially in Mogadishu. The US over 2018 announced airstrikes that killed a sizeable number of the insurgents. US also reopened its diplomatic mission and appointed an ambassador to the country, the first in decades.

The Zuma Must Fall mission materialised in South Africa as the embattled leader was forced to resign his position a full year to the end of his mandate.

The land debate came up strongly as the leftist EFF forced the ruling ANC to champion a bill that okays land expropriation without compensation. It has since been approved into law.

South Africa went into a recession but has since come out of it. The economy was one of Ramaphosa’s major concerns. Changes were made at the Central Bank and a new finance minister appointed after a ‘compromised’ appointee asked to be sacked.

Zuma’s court cases continued as did that of his son, Duduzane. The controversial Gupta family, believed to have been major powerbrokers during Zuma’s leadership fled the county.

Ramaphosa has also established an enquiry as required by law to look into the Gupta linked state capture. South Africa celebrated Mandela’s centenary and also buried two of its greats – Hugh Masakela and Winnie Madikizela Mandela.