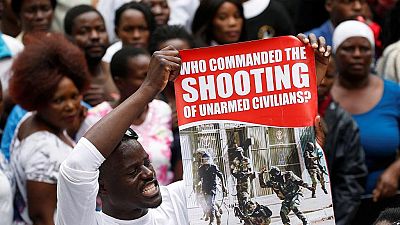 A report into Zimbabwe’s post-election violence that left six people dead and dozens injured in August will be published next week, President Emmerson Mnangagwa said on Friday.

Mnangagwa has blamed the opposition Movement for Democratic Change (MDC) leaders for the violence, while the army has denied allegations it shot civilians during the Aug. 1 protests.

Following the disputed vote, Zimbabwe is experiencing its worst economic crisis in a decade, marked by shortages of fuel and cash and a spike in prices of basic goods.

I received the report, which we are looking into with my deputies. We have agreed that next week we will make it public.

The political rifts have also continued, with MDC leader Nelson Chamisa saying Mnangagwa is an illegitimate leader. Chamisa denies inciting his supporters to take to the streets in the aftermath of the election.

Video footage showed soldiers, some with their faces obscured by camouflage masks, opening fire with automatic weapons during the protests.

“I received the report, which we are looking into with my deputies. We have agreed that next week we will make it public,” Mnangagwa told 6,000 members at ZANU-PF’s first annual conference since Robert Mugabe was forced to retire after an army coup in November 2017.

Mnangagwa also told the party conference in Esigodini, 500 km (310 miles) south-west of Harare that he had won fairly with a huge majority in parliament and would not invite the opposition into his government.

ZANU-PF officials say Mnangagwa wants to end speculation that he will only serve one five-year term and step down in favour of one his two deputies, Constantino Chiwenga, 62.

Chiwenga is the retired defence forces chief who led the coup against Mugabe and is seen as the power behind Mnangagwa. The army still holds significant influence on who runs for top office in ZANU-PF, political analysts said.

The conference is expected to endorse Mnangagwa to run for a second and final term in 2023 when he will be 80 years old.

In the meantime, the president has the immediate problems of fuel shortages and worker unrest to address.

In Harare and most major cities, motorists queued for fuel as shortages continued for a third week, while junior doctors refused to end a two-week strike.