Libya’s election commission has scheduled a constitutional referendum next year, but has asked the government for $28.7 million.

On Thursday, chairman of the High National Elections Commission, Emad al-Sayah said without the funding to boost its ‘zero’ budget, it cannot plan to prepare for the referendum and later elections.

“The second issue is the issue of funding. We have spoken to His Excellency the President at the Presidential Council at the Government of National Accord on December 3, regarding the necessity of establishing a special budget of 40 million dinars ($28.7 million) dedicated to the execution of this matter (the referendum). Some might question this number, given that it is a large one. But we shall explain why this number is needed for the execution of this process”, al-Sayah said.

Some might question this number, given that it is a large one. But we shall explain why this number is needed for the execution of this process.

According to him from a technical point of view, such a constitutional referendum could have been held as early as February, if a budget had been allocated. However, he added that technical equipment and ballot materials still needed to be imported.

A draft constitution has been drawn up to be put to a referendum, but it is not clear how that would work ahead of a national conference planned for early 2019 to discuss possible election protocol.

“The fourth condition, which is also the most important condition for the commission, is related to the national mourning of May 2 that followed the terrorist attack on the commission, where we lost many of our kind colleagues. Therefore, security is our top concern, even before electoral decisions. The commission will henceforth not take any further steps without securing the safety and protection of its members, offices, and branches across Libya”, he added.

Last week, the internationally recognized parliament, the House of Representatives, passed a law billed as first step for the constitutional vote and elections, but the details remain unclear.

The United Nations had previously accused the assembly of obstructing the vote.

Western powers and the U.N. hope Libya will hold a national election by June after a referendum on a constitutional framework to chart a path out of a conflict arising from the overthrow of Muammar Gaddafi in 2011. 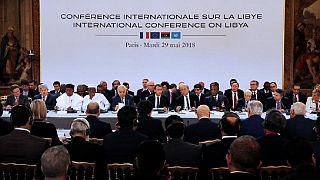