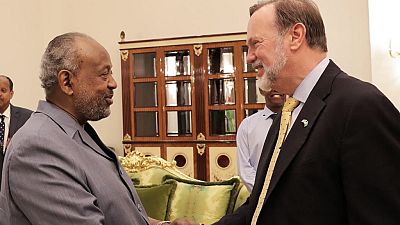 Tibor Nagy, the Assistant Secretary for U.S. Department of State’s Bureau of African Affairs, continues his Horn of Africa tour after arriving in Djibouti on Monday.

Nagy has since held a series of engagements with government, the US embassy and beneficiaries of the the Young African Leaders Initiative, YALI and IVLP.

On the part of government, Nagy met with President Ismail Omar Guelleh and the Foreign Minister stressing the importance of long-term relations between Washington and Djibouti.

“The U.S. and Djibouti share a long-term partnership guided by mutual strategic interests and commitment to address shared challenges, including ensuring a prosperous and secure future for young Djiboutians,” he said in a tweet.

At the embassy in Asmara, he handed an award to Djibouti’s first and only female anti-terrorism investigator, Moumina Houssein Darar. She had been named the first recipient of the Djibouti Woman of Courage Award.

Moumina Houssein Darar, the first and only female Anti-Terrorism Investigator in the Djiboutian National Police, is the first recipient of the Djibouti Woman of Courage Award! pic.twitter.com/VCwWMzxveM

He helped inaugurate the American corner at the embassy before holding a session with Djiboutians who had benefited from exchange programs run by the US government.

Nagy started his Horn of Africa tour in Ethiopia where he held extensive talks with high ranking government officials including the Ministers of Foreign Affairs, Defense and Finance.

Whiles in Ethiopia, he also held talks with the African Union commission. He is due to visit Eritrea and round off his tour in Kenya – in both places he will meet with top government officials.

The Department of State last Wednesday announced Nagy’s visit stating that he will visit “Ethiopia, Eritrea, Djibouti and Kenya as part of US efforts in promoting stronger trade and commercial ties,” a statement read.

The last time a top diplomat undertook a similar visit to the region was in April 2018 when then Principal Deputy Assistant Secretary of State, Donald Yamamoto visited Eritrea, Djibouti before rounding up his visit in Ethiopia.

Yamamoto has recently taken post as US Ambassador to Somalia.