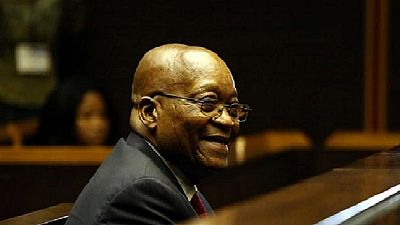 South Africa’s former president Jacob Zuma wants corruption charges relating to a $2.2 billion arms deal to be permanently set aside, his lawyers said on Friday, when Zuma made his fourth court appearance since the charges were reinstated.

Zuma, who was ousted by the ruling party in February, faces 16 charges of fraud, racketeering and money laundering relating to a deal to buy 30 billion rand of European military hardware for South Africa’s armed forces in the late 1990s.

The case is a rare example of an African leader being held to account for his actions. Zuma denies wrongdoing.

On Friday, judge Mjabuliseni Madondo adjourned the case to May 20, giving lawyers time to prepare for a debate on whether there should be a “permanent stay of prosecution”.

The 76-year-old Zuma, wearing a black suit and red tie, was subdued in court. Several former cabinet ministers and African National Congress politicians travelled to Pietermaritzburg, the capital of KwaZulu-Natal province, to support their former patron.

Zuma, whose nine years in power were marked by economic stagnation and credit rating downgrades, has previously said he is the victim of a politically motivated witch-hunt.

The charges against him were originally filed a decade ago but then set aside by the National Prosecuting Authority shortly before he successfully ran for president in 2009.

After his election, his opponents fought a lengthy legal battle to have the charges reinstated, finally succeeding in 2016. Zuma countered with his own legal challenges.

The speed with which prosecutors have moved against Zuma is a sign of his waning influence since he was replaced as head of state by Cyril Ramaphosa, his former deputy.

Ramaphosa has made the fight against corruption a priority as he seeks to woo foreign investment and revamp an ailing economy.